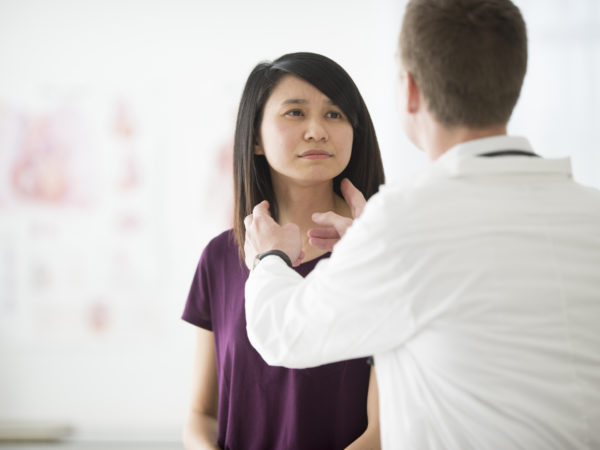 What is thyroid cancer?

The thyroid is located at the base of the neck between the sternum and Adam’s apple. It is composed of two lobes resembling butterfly wings connected by a small strand of tissue called the isthmus.

There are two main types of cells in the thyroid gland, each responsible for making hormones that either help regulate metabolism or calcium concentration in the blood. Follicle cells make the two main thyroid hormones, thyroxine (T4) and tri-iodothyronine (T3) along with thyroglobulin, a protein necessary for the storage and production of thyroid hormones.Parafollicular cells (also known as C-cells) produce calcitonin, a hormone that regulates levels of calcium in the blood.

Cancer can occur in each of these cell lines. Prognosis depends on what kind of cancer develops, but is usually quite good. The most common thyroid tumors can often be completely removed without problems, although serious complications can occur, especially with the more aggressive forms.

What are the symptoms of thyroid cancer?

Patients usually have no thyroid cancer symptoms in the early stages. As thyroid tissue grows, one or more nodules may develop within the gland. These may be solid or fluid-filled, are typically benign and cause no symptoms. However, five percent of these nodules are cancerous and can sometimes grow rapidly, potentially resulting in symptoms such as hoarseness, difficulty swallowing, and troubles with breathing as the nodule expands. One can also have painful swallowing or neck discomfort that spreads up the jaw and into the ears, as well as lymph node enlargement in the neck, around the jaw, ears, and under the collarbone.

Having one or more of these symptoms doesn’t mean you have thyroid cancer. Other conditions – including thyroid nodules that are benign, infection or inflammation of the thyroid gland, and goiter from hypothyroidism or other conditions – can cause similar problems, all of which are highly treatable.

The most serious complication of thyroid cancer is the spread of the cancer to other tissues and organs. This is especially likely in anaplastic cancer, a rare, aggressive form of cancer which often spreads to the trachea and lungs before being diagnosed. Follicular and papillary cancers also may spread to distant organs such as the lungs, bone and liver, but are slower growing and seem to respond better to treatment. Medullary cancer can produce severe diarrhea, which is thought to be due to high calcititonin levels and associated changes in the intestinal secretion of water and electrolytes.

There are several kinds of thyroid cancer. Follicular cells give rise to papillary and follicular cancer. They are more common than other forms, and typically offer an excellent prognosis after treatment. On the other hand, medullary cancer, which comes from the calcitonin-producing C-cells, is a bit more aggressive and difficult to treat. Rare versions of thyroid cancer include a form of lymphoma that grows in the thyroid as opposed to lymph nodes, and a rare but aggressive and often-fatal form that comes from follicular cells, called anaplastic cancer.

Damage to DNA – the genetic blueprint of the body – is the leading cause of most types of cancer. Unchecked DNA damage causes certain cells to grow out of control, eventually leading to tumor growth and spread. Aging also leads to DNA damage as cells lose their ability to repair themselves. In the case of thyroid cancer, DNA damage may occur due to a spontaneous error or as the result of damage associated with aging, as well as from exposure to environmental contaminants, especially radiation. With medullary thyroid cancers, there is also a strong genetic component.

Exposure to radiation puts individuals at greater risk for thyroid cancer. Radiation to the head and neck as seen with cancer treatment directed at this area of the body can place people at an increased risk. Children from the 1920’s all the way to the mid-1950’s received high doses of radiation to treat conditions like thymic hypertrophy, enlarged tonsils and acne. Many decades later, it was discovered that they had a higher incidence of thyroid nodules and cancer than those who didn’t receive radiation as a child.

Those individuals exposed to radiation from atomic weapons’ testing or nuclear power plant accidents also have a higher risk of developing thyroid cancer. This derives from a component of nuclear fallout that exists as a radioactive isotope of iodine, which concentrates in the thyroid gland. It is particularly harmful to children, whose metabolism is high while their thyroids are developing. Taking potassium iodide shortly before expected radiation exposure floods the thyroid with iodine and prevents the uptake of radioactive iodine, thus lessening the risk of thyroid cancer.

Other risk factors include age: papillary and follicular cancers can develop at any age but are more common in young adulthood. Sporadic medullary carcinoma usually occurs in adults; whereas the genetically-linked forms can affect any age, even infants and children. Thyroid cancer affects women two to three times more than men, and also appears more in women who have had children later in life (after age 30). Finally, Caucasians seem to be affected more than those of other races.

How is a thyroid cancer diagnosed?

According to The American Thyroid Association, the evaluation of a thyroid nodule or multiple nodules detected on physical examination proceeds, for the most part, in a stepwise manner. Blood tests are obtained, including a test for thyroid stimulating hormone (TSH), the hormone released by the pituitary gland that tells your thyroid to produce and release more T3 and T4. Based on the results, an ultrasound or nuclear medicine study examining the thyroid gland may be recommended. Fine needle aspiration (FNA) of the thyroid, where a small needle is used to withdraw thyroid cells for examination, may then be considered. FNA is considered by most experts to be the most accurate diagnostic study for evaluating a thyroid nodule to assess the presence or absence of cancer.

What is the conventional treatment of thyroid cancer?

The conventional treatment for thyroid cancer depends on the type of cancer,  where it is located and whether it has spread to other parts of the body, along with the age and general health of the patient. Most people require surgical removal of all or part of the thyroid gland. If a patient has thyroid cancer symptoms such as a nodule and the diagnosis is still uncertain, it will sometimes be surgically removed if suspicion is high for the presence of cancer along with thyroid tissue – often one of the lobes (lobectomy) – to determine if it is indeed cancerous. Surgery involves lobectomy or near-total thyroidectomy, in which the entire thyroid is removed except for the area of tissue around the four parathyroid glands that are located within the gland itself. If lymph nodes are involved, they will also be removed during surgery.

Radioactive iodine is used after surgery to remove any remaining thyroid tissue in the case of papillary or follicular thyroid cancer. Larger doses can be used to destroy any cancerous cells that have spread beyond the thyroid gland. Because radioiodine is taken up primarily by thyroid tissue – including thyroid cancer cells – other parts of the body are less affected. TSH suppression therapy reduces TSH levels in your body, which may help prevent the growth of any remaining cancer cells. This is done with lifelong thyroid supplementation – usually levothyroxine (Levothyroid, Synthroid, or Levoxyl). In addition to suppressing the pituitary gland’s production of TSH, levothyroxine also supplies the missing thyroid hormone needed after the gland has been removed and any leftover tissue has been destroyed through treatment.

Radioiodine treatments aren’t an option for people with medullary cancer because thyroid C cells don’t absorb iodine. In this case, external beam radiation with or without chemotherapy is often used. Prognosis is fair to good. This type of treatment is often used for anaplastic thyroid cancer as well, the most aggressive and fastest growing type of thyroid cancer. Anaplastic cancer often can’t be helped by surgery by the time it’s diagnosed because it has spread too extensively. Radiation or chemotherapy may shrink anaplastic thyroid tumors slightly and make the patient more comfortable but the prognosis with this type of cancer is poor.

What therapies does Dr. Weil recommend for thyroid cancer?

Along with conventional medical treatment which may include surgery and/or pharmaceuticals, Dr. Weil suggests considering adding the following to your daily routine:

Any treatment for cancer, whether conventional, alternative or a combination of both, can be enhanced by simple lifestyle, diet and nutritional supplement strategies. Remember to always discuss any changes in diet and supplements with your health care practitioner.

Supplements
Dr. Weil often recommends certain species of Asian mushrooms to people with cancer and cancer survivors, either used in the diet or taken as supplements. Maitake (Grifola frondosa), shiitake (Lentinula edodes), and agaricus (Agaricus blazei) are all delicious edible mushrooms that have immune enhancing and anti-cancer effects and can be found at specialty grocery stores. These, along with other well-studied medicinal mushrooms, are also available in supplement form.

Dr. Weil also suggests taking a good multivitamin with antioxidants including vitamin C, mixed carotenoids (including lycopene), vitamin E in the form of mixed tocopherols and tocotrienols, and the mineral selenium; B-complex including folic acid and B-12; coenzyme Q-10; and high dose vitamin D3 (cholecalciferol). Each of these supplements has may help reduce the risk of recurrence.

On the subject of taking supplements during cancer treatment, Dr. Weil recommends following the advice of Donald Abrams, M.D., an integrative oncologist at the University of San Francisco and a graduate of the Arizona Center for Integrative Medicine’s Associate Fellowship at the University of Arizona. Dr. Abrams says that questions about taking antioxidants during cancer treatment are the most frequent ones he gets. In the absence of strong evidence, he now advises patients as follows:

Because chemotherapy agents differ in their mode of action, it would be helpful to know whether the particular drugs being used work by an oxidative (free-radical-generating) mechanism. Ask the medical oncologist treating you for that information, and based on the answer whether or not antioxidant therapy is considered safe.