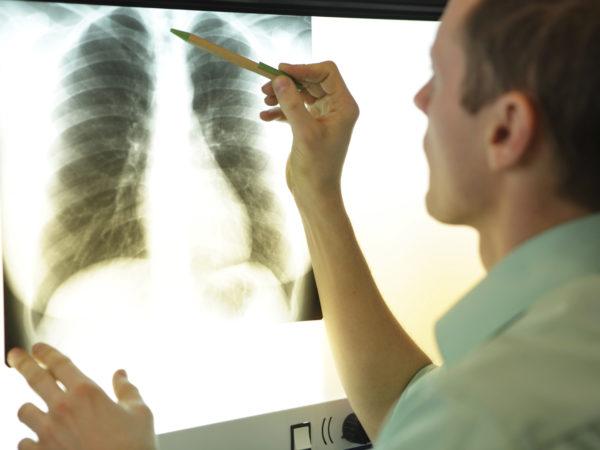 What is lung cancer?
Lung cancer is a collection of abnormal cells in the lung that have the ability to grow into a tumor and has the potential to spread to other areas of the body. Lung cancer type is determined by the way the cells look under a microscope. There are two principal types of lung cancer: non-small cell and small cell (aka oat cell). Non-small cell accounts for 85 percent of all cases while small cell accounts for 10-15 percent. Squamous cell carcinoma, adenocarcinoma, and large cell carcinoma are subtypes of non-small cell lung cancer. Non-small cell cancer tends to have a better prognosis and slower rate of metastasis (or spread) than small cell lung cancer. While small cell cancer is less prevalent, it generally carries a more grave prognosis because it has the ability to metastasize quickly. Lung carcinoid tumors account for less than five percent of all cases of lung cancer. Carcinoid tumors are very slow growing and rarely spread.

Lung cancer is the leading cause of cancer death among both men and women in the US and worldwide. It accounts for about 27 percent of all cancer deaths in the U.S. annually. Each year, more people die of lung cancer than of colon cancer, breast cancer, and prostate cancer combined. Most cases occur in people over the age of 65. According to the American Cancer Society the average age at the time of diagnosis is about 70.

What are the symptoms of lung cancer?
Lung cancer doesn’t typically cause symptoms in its early stages. In fact, at the time of lung cancer diagnosis, some patients may have no symptoms at all. Symptoms of lung cancer usually result when the cancer interferes significantly with the structure and/or function of an organ (for example, growing into a blood vessel feeding the lung, causing the patient to cough up blood and have shortness of breath). Symptoms related to the cancer affecting the structure and function of the lungs include shortness of breath, coughing that doesn’t go away, wheezing, coughing up blood, chest pain, and, sometimes, repeated bouts of pneumonia. Other symptoms result from spread of cancer to the bones (causing severe bone pain) or brain (causing a variety of neurological symptoms including confusion, blurred vision, or seizures). Some lung cancers manifest “paraneoplastic syndromes,” symptoms to related hormone secretion by the cancer. There may also be nonspecific symptoms due to lung cancer including unexplained fatigue or weight loss. Unfortunately, by the time symptoms develop, the prognosis is often poor: the cancer has often metastasized and it is usually inoperable.

What causes lung cancer?
Smoking is, by far, the principal cause of lung cancer and is implicated in 87 percent of all cases. Ninety-nine percent of all small cell lung cancers are due to smoking. Doctors determine the degree of lung cancer risk based on the amount of cigarettes smoked over time: the “pack year” history of smoking. This is calculated by the number of packs of cigarettes smoked per day multiplied by the number of years smoked. Smokers with a 30 pack-year history of smoking or longer are at greatest risk for developing lung cancer. Passive “second-hand” smoking also contributes to lung cancer risk.

Although most lung cancers are due to smoking, every year in the United States 16,000 to 24,000 men and women who never smoked die of the disease. (Researchers consider the term “never smoked” to mean people who have smoked less than 100 cigarettes in their lifetime.) Risk factors for lung cancer among non-smokers may include genetic predisposition, air pollution (such as radon and exhaust fumes) and other environmental or work-related exposures (such as asbestos). Probably the most famous case was that of non-smoker Dana Reeve, the widow of actor Christopher Reeve, who was diagnosed at age 44, 20 to 30 years younger than the typical lung cancer patient and died less than a year later in 2006.

The U.S. Environmental Protection Agency (EPA) lists radon exposure as the leading cause of lung cancer in non-smokers, accounting for about 20,000 deaths every year. Radon is an odorless, colorless gas produced by the breakdown of uranium that seeps out of the earth, more commonly in some places on the planet than others. It sometimes enters basements through concrete cracks and becomes trapped there and concentrates in the air. The risk of lung cancer is higher in people who have lived for many years in a house contaminated by radon.

Exposure to other carcinogens such as asbestos and diesel exhaust increases the risk of lung cancer. This tends to occur in the workplace in jobs traditionally held by men. The American Cancer Society reports that while exposure rates have declined in recent years due to measures taken to protect workers, they remain a concern.

Both indoor and outdoor air pollution increases the risk of lung cancer. A study published online on October 6, 2011 in the American Journal of Respiratory and Critical Care Medicine found that in China where many homes have coal burning stoves and poor ventilation, lung cancer rates are high among non-smoking women.

How is lung cancer diagnosed?
Many lung cancers are discovered incidentally (getting a chest X-ray for another reason) or due to a high clinical suspicion (risk factors for lung cancer in addition to symptoms or signs). Lung cancer screening may identify lung cancer in certain high-risk individuals.

The U.S. Preventive Task Force (USPTF) currently recommends lung cancer screening with the low-dose helical computed tomography scan (LCDT) annually for the following individuals “adults aged 55 to 80 years who have a 30 pack-year smoking history and currently smoke or have quit within the past 15 years.” However, the USPTF encourages discontinuation of annual screening in this demographic “once a person has not smoked for 15 years or develops a health problem that substantially limits life expectancy or the ability or willingness to have curative lung surgery.”

The low-dose helical computed tomography (LDCT) is a computer linked to an low-dose radiation x-ray machine that takes a series of detailed pictures of selected areas inside the body. It is more effective than chest x-rays at finding the disease at an early stage and has been shown to reduce the risk of dying from lung cancer. The National Cancer Institute (NCI) reports that screening with chest x-rays and sputum tests (together or separately) doesn’t decrease the risk of death from lung cancer.

Screening has a downside: radiation from chest x-rays and LDCT scans may increase the risk of cancer. According to the NCI younger people and individuals at low risk for lung cancer are more likely to develop the disease as a result of radiation exposure.

In a positive development, in 2015 Medicare began covering the cost of LDCT scans for seniors at increased risk for lung cancer based on their smoking history.

Once lung cancer is suspected (based on signs or symptoms), the diagnosis of lung cancer involves collecting lung tissue samples through a variety of different methods including sputum samples, bronchoscopy with biopsy and fine needle aspiration. Less commonly, diagnosis may involve thoracentesis (taking a sample of any fluid collection surrounding the lungs) and rarely requires surgical procedures such as open lung biopsies (usually the risk of this procedure outweighs its potential benefit).

Staging lung cancer (assessing if it has spread and where it has spread) usually involves a CT scan or MRI, bone scan, and or PET scan (looking at the metabolic rate of tissues). Staging is important because it helps determine the prognosis and the course of treatment for cancer. Early stages of lung cancer have a 40-50% 5 year survival rate as opposed to advanced stage lung cancer (especially if it is small cell), which has an abysmal 5-year survival rate of 1-5%.

What is the conventional treatment for lung cancer?
The conventional treatments for non-small cell lung cancer include surgery, radiation therapy and chemotherapy. A less well-known approach, targeted therapy, is the use of drugs to block the growth of new blood vessels that form to promote tumor growth, as well as other agents that take aim at a protein called epidermal growth factor receptor that can cause cancer cells to grow faster. Still other drugs can zero in on a gene rearrangement that can cause cancer cells to grow faster. Targeted therapy may be given with chemotherapy or by itself. One of the newest therapies that may be of benefit is called photodynamic therapy (essentially using specific wavelengths of light to target cancers marked by naturally occurring photosynthetic agents).

In some cases a technique called radiofrequency ablation may be used to treat some small lung tumors in people who can’t tolerate surgery. Here, high-energy radio waves heat the tumor and then a thin probe is inserted through the skin and delivers an electric current to heat the tumor and destroy cancer cells.

The main treatment for small cell lung cancer is chemotherapy. Radiation therapy may be of additional benefit. Surgery is rarely required.

The main treatment options for lung carcinoid tumors are surgery, chemotherapy and radiation.

What therapies does Dr. Weil recommend for lung cancer?
When dealing with cancer, Dr. Weil advises that you first determine what conventional therapies have to offer. Then he suggests trying to find an oncologist who is open to an integrative approach; see Integrative Oncology edited by Donald Abrams, M.D. and Dr. Weil. (Oxford University Press, 2009).

There is some evidence that suggests that Vitamin B6 (pyridoxine) may help to prevent lung cancer among smokers. (Hartman TJ, Woodson K, Stolzenberg-Solomon R, et al. Association of the B-vitamins pyridoxal 5′-phosphate (B6), B12, and folate with lung cancer risk in older men. Am J Epidemiol 2001;153:688-94).

If you are at higher risk for lung cancer (long-term smoker, radon or asbestos exposure, etc…), you should avoid taking a supplement with beta carotene or Vitamin A because this may further increase your risk of lung cancer. (JNCI J Natl Cancer Inst (1996) 88 (21): 1550-1559.)

Dr. Weil notes that the best way to protect yourself from lung cancer is to avoid tobacco – quit if you smoke, and if you don’t, stay away from smokers and smoky surroundings. He also advises eating plenty of fruits and vegetables, and having your home tested for radon.