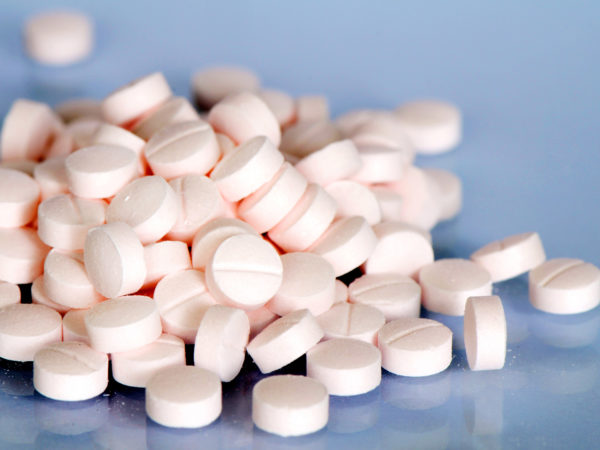 As you may know, daily low-dose aspirin lowers the risk of heart attack, and over the years, we’ve learned that it seems to protect against colorectal cancer and some other types of cancer as well. The latest on this comes from an analysis of six published systematic reviews and four individual studies on the long-term use of aspirin in people aged 50 to 65 who are at average risk of heart disease and cancer. The U.K. researchers who reported it found “strong evidence” that taking aspirin daily reduces the risk of colon cancer as well as heart attack and stroke and “good evidence” that it also lowers the risk of esophageal and stomach cancer. Some protection was also seen against breast, prostate and lung cancer.

The reviewers found that the anticancer effect kicked in only after three years of taking one “baby aspirin” (75 to 81 mg) daily. The death rate from these diseases dropped only after five years of use. Larger doses provided no additional benefit.

The most common serious side effect of daily aspirin use is gastrointestinal bleeding, a risk that increases with age. But the British researchers concluded that the benefits of taking daily aspirin for protection against heart attack and cancer far outweighs the risk posed by potential side effects in people aged 50 to 65. However, the risk of serious bleeding as a result of taking aspirin daily increases dramatically after age 70. Study leader Jack Cuzick was quoted in news reports as recommending that people 70 and older not start taking aspirin to prevent cancer because of this.

In a statement accompanying the online publication of the review, Dr. Cuzick said that taking baby aspirin daily “looks to be the most important thing we can do to reduce cancer after stopping smoking and reducing obesity and will probably be much easier to implement.” The research team noted that many studies have shown that taking baby aspirin daily can reduce the risk of cardiovascular events by 12 percent in the general population. The new results also showed a seven percent reduction in the relative risk of cancer, heart attack and stroke among women who took baby aspirin daily for 10 years. The risk reduction in men was nine percent after taking baby aspirin for 15 years. All told, the review found a four percent decrease in the death rate from these diseases after 20 years.

By the way, a National Cancer Institute (NCI) analysis published earlier this year (2014) found that taking aspirin daily may lower a woman’s risk of ovarian cancer by as much as 20 percent. It is believed that aspirin, being an anti-inflammatory drug, may work by decreasing the chronic or persistent inflammation that increases the risk of cancer and other diseases. In addition, all anti-inflammatory agents also inhibit cell proliferation.

Source:
Jack Cuzick et al, “Estimates of benefits and harms of prophylactic use of aspirin in the general population.” Annals of Oncology, doi:10.1093/annonc/mdu225