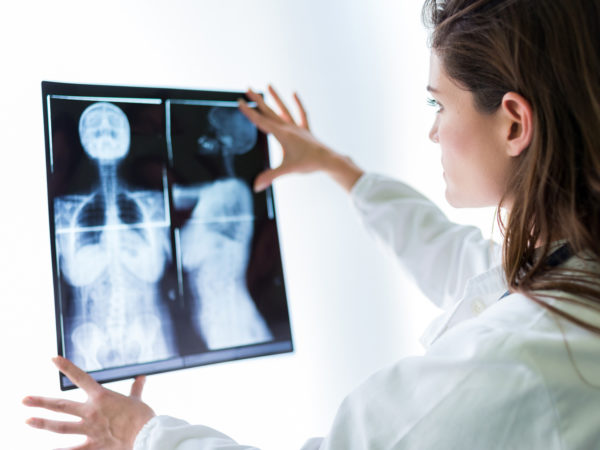 Women’s breasts are considered dense when they contain a lot of fibrous or glandular tissue and not much fatty tissue. This difference in composition shows up on mammograms and, according to the American Cancer Society, is not related to the size or firmness of the breast. Dense breasts are associated with a higher risk of breast cancer than are less dense breasts because dense breast tissue shows up on mammograms as white, as do tumors, and thus there’s a chance that it can obscure a growth.

However, a study published in the May 19, 2015 issue of the Annals of Internal Medicine, concluded that not all dense breasts present a higher risk of cancer. The researchers reported that about 45 percent of women have dense breasts, but only about half of them would require MRIs or ultrasound scans in addition to mammograms to screen for cancer. This is important, since 22 states now require that women be informed following mammograms whether or not they have dense breasts, and many women who do are being urged to have the additional tests. Legislation to require that all women in the U.S. be notified of their breast density following mammograms has been introduced in Congress.

Breast density falls into four separate categories: (1) breasts that are almost entirely fatty and therefore not dense; (2) breasts with scattered areas of fibroglandular density; (3) breasts described as “heterogeneously dense” – enough density to obscure tumors; and (4) those that are extremely dense, so much so that the sensitivity of mammograms is reduced.

The researchers reviewed the medical records of 365,426 women, ages 40 to 74, who had screening mammograms from 2002 through 2011. They were looking for subgroups of women with dense breasts to determine which ones had the highest risks of developing “interval cancers,” those that women or their doctors find as lumps in the breast within a year of having had a normal mammogram.

The investigators found that women with the highest risks of interval breast cancers were those with extremely dense or heterogeneously dense breasts and had an increased chance of contracting cancer after risk factors including age, family history of breast cancer, ethnicity and previous breast biopsies were factored in. Once all that was considered, the researchers concluded that only 21 percent of the women in the study with dense breasts were designated as at highest risk of breast cancer and therefore were most likely to benefit from MRIs or ultrasound tests after having normal mammograms. Based on their calculations, however, the investigators noted that if the additional tests were limited to women whose combination of breast density and other factors places them at highest risk, some 50 cancers would be missed among women whose risk was not viewed as “highest.” But the additional testing can lead to false positive results that in turn may encourage needless surgery. And the tests themselves are expensive and not always covered by health insurance.

If you know your breast density, you can determine your five-year cancer risk by using an online calculator available at https://tools.bcsc-scc.org/BC5yearRisk/intro.htm.