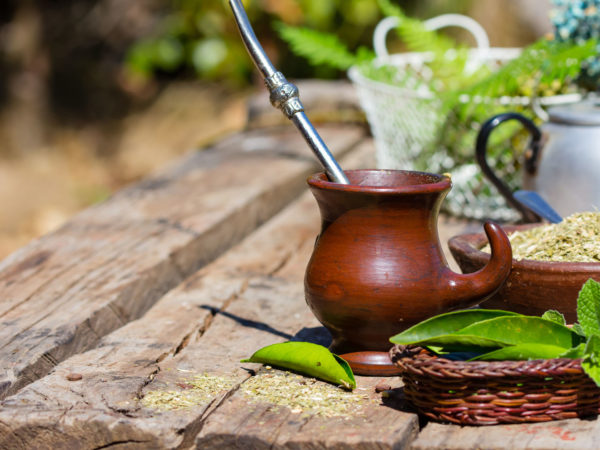 Yerba maté (also known simply as maté) is a tea made from the dried leaves of Ilex paraguariensis, an evergreen shrub in the holly family that grows in Central and South America. It is a stimulant, containing caffeine and related compounds. Maté (pronounced MAH-tay) is most popular in Paraguay, where it has been the centuries-old drink of the Guarani Indians as well as a traditional treatment for everything from fatigue to appetite control to a weakened immune system. In Argentina, the tea is favored over coffee. Traditionally, it is served sweetened and drunk from a gourd (maté) through a silver straw. Many varieties have a distinctly smoky taste.

There is some evidence from South America connecting yerba maté use to cancers of the mouth, esophagus, prostate, bladder and lungs among people who drink it habitually. The few studies that have found links between cancer and yerba maté show the highest risk is among users who also smoke and are heavy drinkers of alcohol. However, at least one study found that the risk of cancers of the mouth, pharynx, larynx and esophagus was greater in people who drink yerba maté regularly but do not smoke or consume alcohol. Clearly, more investigation is needed. I’ve seen no research suggesting that drinking the tea occasionally is in any way dangerous.

The cancer risk, if it exists, may be due to the fact that maté contains polycyclic aromatic hydrocarbons (PAHs), compounds that are known to be carcinogenic. One study found very high concentrations of these in yerba maté leaves and in both hot and cold infusions of them. (Tobacco smoke and grilled meat also contain PAHs.)

On the positive side, some research suggests that drinking maté preserves bone mineral density in postmenopausal women, although the investigators described these findings as preliminary. And a study from the University of Illinois suggested that bioactive compounds found in one cup of the tea can disrupt colon cancer cells, at least in the lab. The researchers reported that caffeine derivatives in the tea damaged cancer cell DNA causing the cells to self-destruct. However, no human studies have linked drinking yerba maté to a lower risk of colon cancer.

If you enjoy maté, I see no risk in drinking it in moderation. But bear in mind that it contains xanthines, a class of chemical compounds that includes caffeine, as well as theophylline and theobromine, the stimulants in tea and chocolate. Too much can trigger the same jitteriness and other problems associated with excessive intake of caffeine.