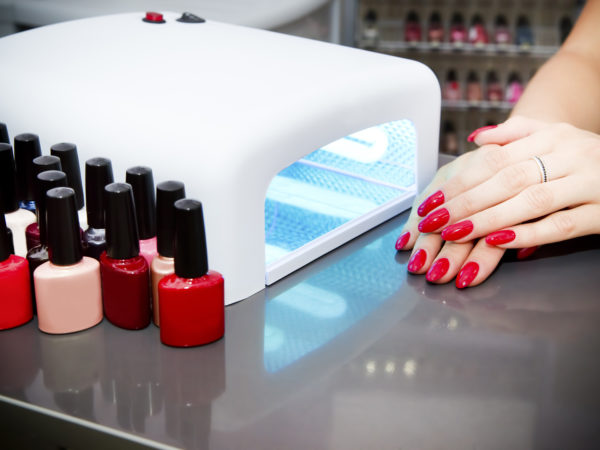 Gel manicures can certainly damage your nails, but I haven’t seen any evidence that they cause cancer. In addition, it now seems highly unlikely that the ultraviolet (UV) lamps used to dry (“cure”) these manicures (and others) can lead to skin cancer, as an earlier scientific report had suggested.

Gel techniques rely on a nail polish that delivers a manicure lasting two weeks or more without chipping. This is much more durable than manicures with standard nail polishes. Dermatologists have warned that gel polishes can lead to nail thinning, brittleness, peeling and cracking, especially when used frequently, and that these manicures may camouflage disease when women wear them repeatedly. Some hospitals bar female personnel who deal directly with patients from having these manicures because of the risk of bacteria collecting under the nails. For the same reason, hospitals generally prohibit artificial nails (even though doctors and nurses typically wear gloves when they are in contact with patients).

The concern among dermatologists about gel manicures focuses on the UV lamps used to seal the polish and on the fact that to remove gel polish, you have to soak your nails in acetone for at least 10 to 15 minutes. There doesn’t seem to be an epidemic of nail damage in women due to gel manicures, but in a study reported in the March 2012 issue of the Journal of Cosmetic Dermatology, researchers attributed nail weakness, brittleness and thinning seen in five women to the process. The study also found thinning of the nail plate in one woman who was tested before and after a gel manicure with ultrasound and with an imaging test called reflectance confocal microscopy. However, the researchers couldn’t determine whether the damage to the nails was due to the gel polish or to the acetone soak. This chemical is very drying to nails and irritating to the skin surrounding them. In addition, the American Academy of Dermatology has warned that some of the nail damage seen with gel manicures might stem from an allergy to the solvent.

As for the UV lamps, there is scant evidence that exposure while waiting for your nails to dry could cause cancer. It is true that UV light is damaging to the skin and is responsible for skin cancer related to excess sun exposure and time spent in tanning beds. Concern about the UV light used to dry manicures stems from a study published in the April 2009 issue of the Archives of Dermatology. The authors described two cases of healthy middle-aged women who developed non-melanoma skin cancers on their hands that were attributed to the use of UV nail lamps. One of the women had been using UV light to dry her nail polish twice a month for 15 years; the other woman had used nail lamps about eight times in a year before her cancer was diagnosed.

The latest word on this issue comes from research published in the Journal of Investigative Dermatology in April 2013. The investigators looked at three types of UV lamps and measured the radiation each one emitted in a 10-minute session, more time than most women would spend drying their nails in a salon after manicures. They concluded that you would have to dry your newly enameled nails under one of these lamps weekly for over 250 years to get exposure equivalent to the amount a dermatology patient receives in a single UV-light treatment for other skin conditions where UV is necessary.