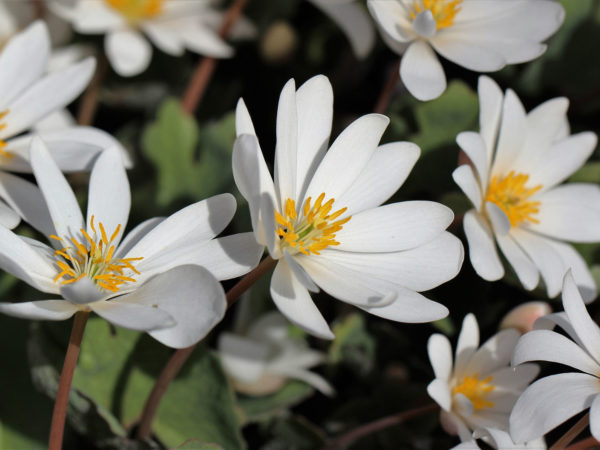 Bloodroot (Sanguinaria Canadensis) is a small woodland herb that grows in the north central United States and Canada. I have recommended it in the past for removal of moles and skin tags, those skin-colored, rubbery growths that typically hang from the skin by a little stalk – common on the neck, armpits, groin, eyelids, and other body folds.

Bloodroot has also been used by nontraditional healers for years to treat skin cancer. It has been in the news recently because a healer in Georgia is accused of practicing medicine without a license for dispensing what has been described as a “flesh-eating herbal paste” containing bloodroot as a skin cancer treatment. Years ago, a cancer treatment popularized by Dallas entrepreneur Harry Hoxsey included a topical paste containing bloodroot and other compounds for external cancers. Despite credible reports that his treatments led to some cures, Hoxsey was labeled a quack and forced to move his clinic to Tijuana, Mexico. (For more on this subject, see the excellent 1987 film, “Hoxsey: How Healing Becomes a Crime.”)

Although Hoxsey’s paste has never been formally studied, conventional doctors have used an identical one, sometimes in combination with surgery, to successfully remove skin cancers. It is a mixture of bloodroot and zinc chloride and is known as “Mohs chemosurgery,” after Frederick Mohs, M.D., who invented the technique.

In the Georgia case, I believe that the paste was dispensed to women with breast cancer, and I’ve read reports that this led to excruciating pain and mutilation of breast tissue. Bloodroot has been used by some traditional healers to treat breast cancer, but I’m not aware of any scientific research suggesting that it can help.

As far as skin cancer is concerned, little is known about the results of self-treatment with bloodroot pastes sold on the Internet or dispensed by traditional healers. A report by two dermatologists published in the December 2002 Archives of Dermatology described the cases of four patients who had tried the pastes on their own. One appeared to have a complete cure, but a biopsy showed residual tumor. Another patient got rid of his skin cancer but was severely scarred in the process. A third was lost to follow up, and a fourth appeared to have cured his nasal basal cell carcinoma for several years, but the cancer recurred, requiring extensive surgery. I have followed one case of an elderly man who used bloodroot paste successfully to remove a skin cancer on the scalp that had recurred after surgery.

If you choose to use bloodroot to remove skin tags or moles, you can buy it in powdered form or as a paste, apply it to the growth you want to remove and then cover with a bandage. Repeat this for three days, washing the area with hydrogen peroxide before each new application. The paste will cause intense inflammation at the base of the growth, which usually turns pale, then falls off, leaving a very minimal scar and no damage to normal tissue. I have the seen bloodroot paste do a better job with moles in difficult places than conventional surgery. But I advise using it with caution and following product directions carefully.

I do not recommend using bloodroot paste, or anything else for that matter, for the self-treatment of skin cancers. It might not get all malignant tissue. Only examination by biopsy can confirm a diagnosis or a cure.