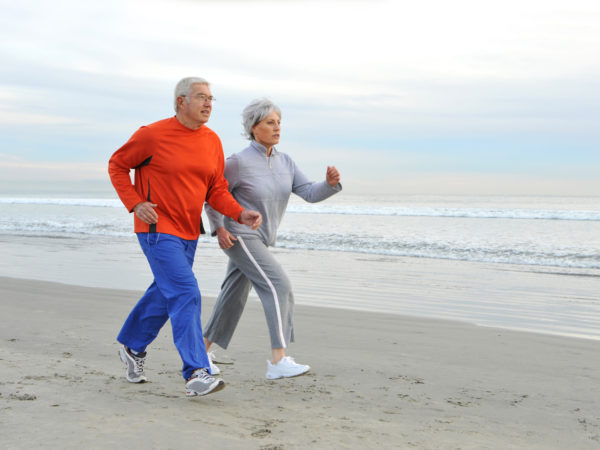 I think combining weight loss with performing the right kind of exercise is the way to go. In 2011, a British review found that being overweight doubles the risk for osteoarthritis of the knees and that being obese quadruples it. The reviewers reported that one in 10 people over age 55 have severe knee arthritis, and many more suffer from chronic knee pain. They calculated that if obesity were eliminated about one-quarter of all knee osteoarthritis cases would be prevented.

The latest study on the subject found that weight loss plus exercise did the most good in reducing the pain, inflammation and functioning of arthritic knees. Researchers at Wake Forest University in North Carolina enrolled 454 overweight and obese adults age 55 or older with mild or moderate knee arthritis and assigned them to 18 months of diet counseling, exercise or both with a goal of losing at least 10 percent of their weight. The exercise component required one hour of aerobic walking and strength training three times per week. Of the 454 participants who enrolled, 399 stayed with the investigation to its conclusion.

The study, published in the September 25, 2013 issue of the Journal of the American Medical Association, found that participants in the diet and exercise group lost an average of 23 pounds, compared to almost 20 pounds in those who dieted but did not exercise and only four pounds in those who exercised but did not diet. The researchers noted that those in the diet and exercise group and the diet alone group had less pain and better overall functioning than those in the exercise only group when the 18-month study ended. Of those who lost weight with diet and exercise, 38 percent reported little or no knee pain compared to 20 percent of the participants in the diet-only group and 22 percent of those in the exercise-alone group. Those who dieted and exercised also were able to walk faster, had more mobility and fewer inflammatory markers in their blood than the patients in the other groups. The research team also noted that participants who lost 10 percent or more of their body weight (regardless of the group they were in during the study) had greater improvements in inflammation and other arthritis measures than those who lost less weight.

The findings of the Wake Forest study also suggest that diet and exercise can provide more pain relief than medication. Study leader Stephen P. Messier noted that medication helps about half of patients with knee arthritis by reducing their pain by 30 percent, but often without any improvement in functioning.

In addition to weight loss and exercise, I recommend making some specific dietary changes to reduce the inflammation and pain of osteoarthritis. Research has shown that foods rich in omega-3 fatty acids and the spices ginger and turmeric may be of benefit. And foods rich in antioxidants – plentifully found in most vegetables and fruit – may help reduce tissue damage from inflammation.