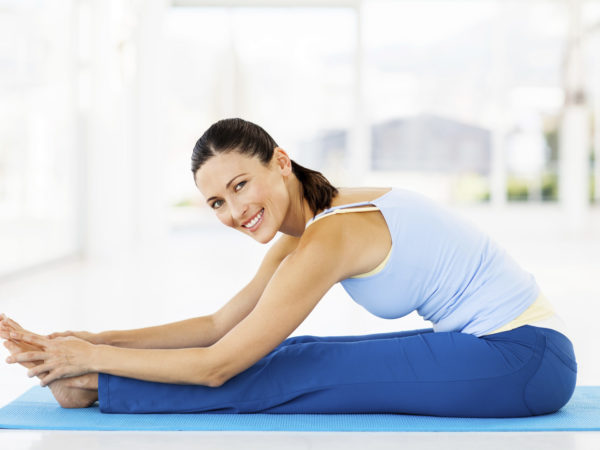 The idea that weight-bearing activity is key to maintaining bone strength comes from studies showing that lack of exercise – among people who are bedridden, for example – leads to bone loss. While that suggests that weight-bearing exercise helps build bone, there isn’t much evidence to show that everyday activities, such as walking, help.

Some research, however, does suggest that practicing yoga can help build bone. A pilot study published in 2009 showed that only 8 to 10 minutes of yoga daily resulted in increased bone density in the spine and hips of 11 patients, average age 68, with osteoporosis or osteopenia (below normal mineral density but not low enough to be considered osteoporosis). No such changes took place among those in a control group who did not perform yoga. At the study’s end, five participants who had osteopenia were reclassified as normal, while two patients with osteoporosis were considered osteopenic after the study.

Based on these promising results, physiatrist Loren M. Fishman, M.D. of Columbia University, and three collaborators recruited volunteers via an Internet search for a larger study. Of the 741 people who signed up, 83 percent had been diagnosed with osteoporosis or osteopenia. A total of 227 of the volunteers (202 of them women) stayed with the study for 10 years and practiced the assigned 12 yoga poses daily or every other day, holding each pose for 30 seconds. The entire daily routine took only 12 minutes. The researchers provided the volunteers with a DVD of the yoga poses, and the participants recorded what they did and how often through an online program.

The assigned poses are listed below (You can find video demonstrations of these poses on YouTube).

After 10 years, improved bone density could be measured in the participants’ spine and femur (thighbone). (Improvements in bone density in the hip weren’t considered statistically significant.) None of the participants sustained fractures or experienced serious injuries related to their practice of yoga.

Dr. Fishman was quoted in the New York Times as saying that “yoga puts more pressure on bone than gravity does” and that opposing one group of muscles against another stimulates bone-making cells (osteocytes).

The study was unusual because the volunteers were self-selected and there was no control group. A new study from Dr. Fishman’s group designed to determine a dose-response relationship between yoga and bone mineral density and bone quality was scheduled to begin in late 2016.

Based upon what has been learned so far, it does appear that practicing yoga can help strengthen bones. That would add to what we already know about yoga’s many benefits on physical, emotional, and spiritual well-being.