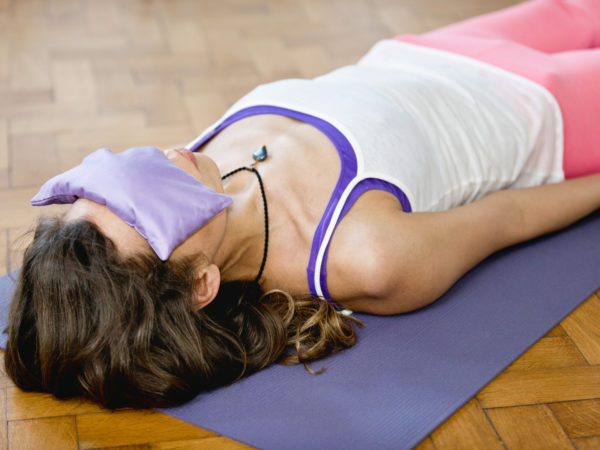 “The Corpse Pose may be the most difficult pose of yoga – not because of its physical requirements, but because of the mental focus you need to properly perform it.” – Andrew Weil, M.D.

Description & History
The Corpse Pose is considered by many practitioners to be the most important part of a yoga session. It is most often used as the final pose of a yoga sequence as a time for relaxation and recovery. The Sanskrit name of Corpse Pose, Savasana, comes from sava meaning corpse and asana meaning posture.

In Corpse Pose, the body rests in the supine position: lying with the back on the ground and face up. During the pose, focus is placed on breathing and the release of tension from the body.

How to Perform Corpse Pose

That last benefit is referred to as “passive recovery” after a yoga session, as opposed to “active recovery” such as walking. One study that looked at recovery periods following short, high-intensity hatha yoga sessions found that active recovery was preferable for those who wanted to return to work quickly after their session. This was due to the more efficient restoration of the pre-yoga metabolic rate. The prolonged relaxation induced by the corpse pose in passive recovery may not lend itself to a quick return to work, but if your goal is rest and repose, and not a rush back to work, the Corpse Pose should help you stay relaxed.

Researchers have also examined the effects of certain yoga poses and breathing exercises as potential therapeutic options for patients suffering from schizophrenia. Because the Corpse Pose focuses on relaxation and breathing, it was incorporated into the study. Results of the 8-week program, which were published in The Journal of Alternative and Complementary Medicine, reported significant reductions in psychopathology and increased quality of life for those practicing the pose, compared to the control group.

Modifications & Variations
There are no modified or advanced variations of the Corpse Pose since it is a simple resting pose. To ease discomfort from lying on the ground, place a yoga mat or towel underneath your body for support. You can also roll up the yoga mat or towel and place it under your lower back for lumbar support. It is important to be comfortable while in the Corpse Pose as the purpose of the pose is the focus on releasing tension built up in the body. Any slight discomfort can distract you and make you lose concentration.

Precautions
If you have back pain or have difficulty lying on your back for an extended period of time, refrain from performing the Corpse Pose. Also, be cautious when standing after performing the Corpse Pose as a sudden drop in blood pressure could cause fainting. To counter this risk, stand up slowly by first rolling over, then sitting up, going to your knees, and then slowly rising to standing.

Visceglia, Elizabeth, and Stephen Lewis. “Yoga therapy as an adjunctive treatment for schizophrenia: a randomized, controlled pilot study.” The Journal of Alternative and Complementary Medicine 17, no. 7 (2011): 601-607.