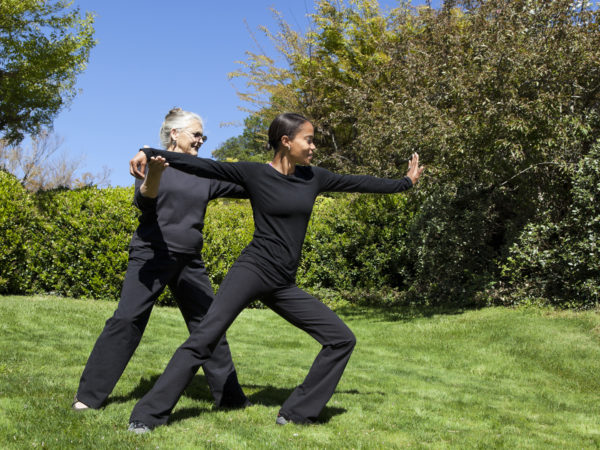 Tai chi certainly appeared to help patients in a small but impressive study at Boston’s Tufts Medical Center. Because fibromyalgia is such a difficult disorder to diagnose and treat, I consider the findings of this clinical trail to be very significant.

Characterized by a generalized, aching pain, fibromyalgia affects about 5 million Americans, mostly women of childbearing age. Symptoms include aches and stiffness in muscles, tendons and ligaments, and can occur in any region of the body. The pain may be either widespread or affect only a specific area.

Until now, regular physical activity, particularly stretching and low-impact aerobic activity (swimming, walking, yoga, or using cardiovascular machines like stationary bikes or elliptical trainers) was seen as one of the most effective treatments for fibromyalgia. But the Tufts study suggests that tai chi works even better, (although it was tested against stretching exercises and wellness education, not against low impact aerobic activity).

Tai chi is a formal series of flowing, graceful, slow-motion movements designed to harmonize the circulation of energy (chi) around the body. It is a good method of stress reduction and relaxation, and promotes flexibility, balance, and body awareness. In the Tufts study, patients were taught the yang style of tai chi, only one of a number of styles.

The Tufts results were published in the August 19, 2010 issue of the New England Journal of Medicine. They showed that after 12 weeks of tai chi, fibromyalgia patients in the small study (only 66 patients participated) had less pain, fatigue, sleeplessness and depression and better physical functioning than a comparable group of patients who did stretching exercises and received wellness education. Better yet, the patients who practiced tai chi sustained their improvement three months after the study concluded and one-third stopped using medication they had been taking, compared with improvements in only one-sixth of the patients in the stretching group.

During the study, the fibromyalgia patients had tai chi classes twice a week and were given a DVD so that they could practice at home for 20 minutes a day. The researchers said that bigger studies with other tai chi approaches are needed to confirm the Tufts findings, but that doesn’t take away from the fact they are very good news for fibromyalgia patients everywhere.