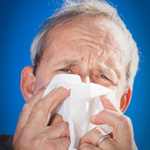 Bloody noses are very common in winter due in large part, as you suggest, to seasonal dry air that irritates and dries nasal membranes. Colds, which are also more frequent in winter, irritate these membranes as well. Other common causes of nosebleeds are repeated nose blowing, allergies, and some common drugs that dry the nasal membranes, including antihistamines and decongestants used to control a runny or stuffy nose. Smoking also contributes to nasal dryness and irritation, so if you smoke, quit.

Most nosebleeds (more than 90 percent) come from small blood vessels (capillaries) located in the front of the nose, usually in the septum, the divider between your nostrils. Some people are more at risk of nosebleeds because their capillaries are closer to the surface. Occasionally, nosebleeds can be a symptom of a more serious systemic problem, such as high blood pressure or a clotting disorder.

One way to deal with the dry air that contributes to your nosebleeds is to buy a humidifier for your home. You also could try a product called Ayr, a saline nasal gel sold in drug stores; just squirt a little in your nose. Other options are to rub some Vaseline, liquid vitamin E, or aloe gel in your nose. You can also take vitamin C, which decreases the fragility of small blood vessels. The dose is 200 milligrams twice a day. Yet another possibility is grape seed extract or a proprietary pine-bark extract called Pycnogenol; these are sources of anthocyanin pigments that have the same effect. All are worth a try.

To deal with active nosebleeds, sit upright or lean your head slightly forward and pinch both nostrils (do not lean back). Hold your nostrils shut for five to 10 minutes without letting go and breathe through your mouth. By plugging your nose, you stop the blood flow and allow a clot to form. If the bleeding hasn’t stopped after 10 minutes, spray some decongestant into your nose. This shrinks the blood vessels. Then hold your nose again for 10 minutes. You could also try sniffing a little bit of powdered yarrow (Achillea millefolium), a safe herbal remedy that stops surface bleeding.

If after 20 minutes you’re still bleeding, see a doctor. You may need to have the blood vessels cauterized with silver nitrate solution. You’ll also likely need professional help if you’re taking blood thinners or large amounts of aspirin. Note that high doses of vitamin E and fish oil have blood-thinning effects that can contribute to the problem.