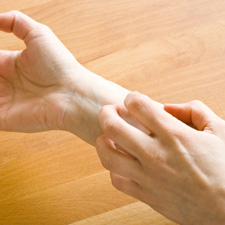 Between 10 to 20 percent of the population experience hives at one time or another. As you know, these red and itchy bumps on the skin are mediated by histamine, a substance released in the body during inflammatory and allergic responses. In some people, hives are triggered by stress, while in others food sensitivities and even exercise or temperature changes can be responsible. The fact that you’ve been dealing with hives for three years is unfortunate and uncomfortable, but not all that unusual. In about 75 percent of all cases of chronic hives, the reaction usually disappears within about eight months, but as you’ve found, it can go on for years.

The latest I’ve seen on treatment for chronic hives comes from the University of Nebraska Medical Center where researchers found that adding vitamin D3 supplements to a combination of allergy medications (one prescription and two over-the-counter drugs) could provide relief for patients who had experienced severe chronic hives for five to 20 years. Some had been treated medically and some had not. Standard therapy for chronic hives is to control symptoms with antihistamines and other allergy medications. Many of these are expensive, and some have significant side effects, the team leader noted.

For the study, half of the 38 patients participating took 600 IUs of vitamin D3 daily while the other half took 4,000 IUs. The researchers reported that after just one week, the severity of symptoms decreased by 33 percent for both groups of patients. However, at the end of three months, those taking 4,000 IUs of vitamin D3 had a further 40 percent decrease in severity of their hives, while after the first week, no further improvement occurred in the patients taking the lower dose.

The researchers termed the study results "a significant improvement," and noted that the higher dose of readily available vitamin D3 could be considered a safe and potentially beneficial therapy. They wrote that those patients taking the higher dose of D3 also had less severe hives during the study – they didn’t have as many hives, and reported a decrease in the number of days a week they had outbreaks.

Another strategy would be to try a course of quercetin, a bioflavonoid from buckwheat and citrus fruits that works by stabilizing the membranes of cells that release histamine. This often helps brings inflammatory and allergic reactions under control. You can buy quercetin products in natural foods stores. The best form is a coated 400 mg tablet, taken twice a day between meals. It can take six to eight weeks of continuous use for quercetin to build up to therapeutic levels in the body. To soothe the itching of hives, try cornstarch or colloidal oatmeal added to bath water.

Because there is an obvious mind-body connection with the histamine system and with hives, I would strongly recommend working with a hypnotherapist or guided imagery practitioner. You can get a referral to a practitioner of guided imagery by contacting the Academy for Guided Imagery and a hypnotherapist by contacting the American Society of Clinical Hypnosis.