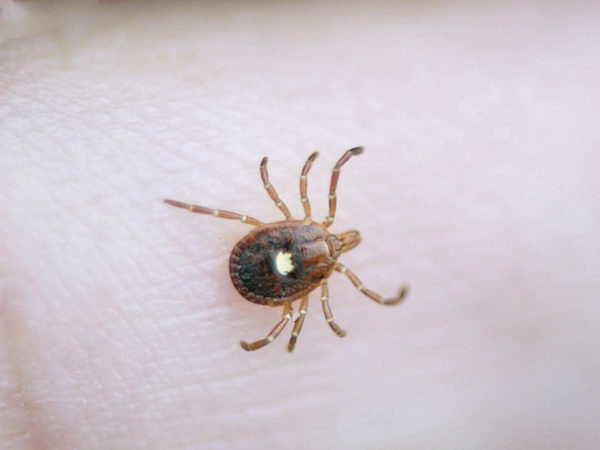 You’re referring to Amblyomma americanum, the so-called “lone star” tick, and the allergy that can follow its bite. The problem, a reaction to eating meat, may not occur for weeks after the bite, and the reaction itself may not occur for up to eight hours after eating meat – lag times that may obscure its connection to the bite. So far, lone star tick bites are thought to be responsible for thousands of cases of sometimes-severe allergies to meat, including beef, pork, lamb, deer and rabbit. The ticks are found in Tennessee, North Carolina and Virginia but are reported to have spread up the east coast to New York’s Long Island, where hundreds of allergic reactions to meat have occurred, and as far north as Maine.

The allergy is thought to develop because the tick transmits a carbohydrate called alpha-gal sugar when it bites humans. Humans don’t have this sugar, but it is found in many kinds of meat. The tick bite leads to formation of antibodies that set off an allergic reaction when meat containing the carbohydrate is next eaten. One explanation for the delay in symptoms is that alpha-gal is concentrated in animal fat, which isn’t digested for several hours.

Symptoms of meat allergy can include hives and swelling, along with vomiting, diarrhea, difficulty breathing and a drop in blood pressure. The last two symptoms can signal anaphylactic shock, which can be fatal.

This phenomenon is so new (the first cases were seen only three years ago) that we have no idea whether the allergy is permanent or will fade over time. Treatment can include an injection of epinephrine to counter anaphylaxis, as well as oral antihistamine and steroids. Once the symptoms are under control, patients may be given an epinephrine auto-injector to use should severe allergic symptoms recur.

Once it is confirmed that a tick bite led to the allergic reaction, all patients can do to prevent another episode is to avoid meat. The reaction doesn’t occur after eating chicken and other types of poultry, fish or seafood. However, I’ve read that in some cases consuming milk or ice cream can trigger symptoms. According to news reports, tick bites have been linked to meat allergies elsewhere in the world. Cases have been reported in Australia, France, Germany, Sweden, Spain, Japan and Korea.

Lone star ticks typically feed on white-tailed deer and wild turkey. Their name comes from the single white spot on the backs of the females. These ticks are larger than the deer ticks associated with Lyme disease.

Your best defense against tick bites is to stay out of wooded areas they inhabit. If you can’t avoid these areas, tuck your pants into your socks, use a natural tick repellent on your skin and clothing. (A number of these products are on the market. You can also find online recipes for making your own tick repellent from essential oils, though I cannot vouch for their effectiveness.) Be sure to check yourself, your gear and your pets carefully when you get back home. To protect pets, you can try a natural product called Flea N’ Tick Begone.

To remove a tick use tweezers, grab the tick as close to the skin as possible and pull it out slowly. Pulling slowly is key; if you pull too quickly, you might remove just the body, leaving the head. If you find a large number of ticks on your pet or find them hard to remove, contact your vet immediately.

Sources:
S.E. Wolver et al, “A peculiar cause of anaphylaxis: no more steak? The journey to discovery of a newly recognized allergy to galactose-alpha-1,3-galactose found in mammalian meat.” Journal of General Internal Medicine, February 2013. doi: 10.1007/s11606-012-2144-z.