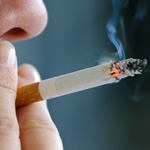 Social smoking may not be quite as dangerous as habitual smoking, but those who do it are still at higher-than-normal risk for a long list of health problems. Researchers haven’t yet determined exactly how to distinguish between social (or intermittent) and "light" smoking based on how many cigarettes you consume per day, but an analysis from the Center for Tobacco Control Research and Education at the University of California, San Francisco, found that any amount of smoking is associated with serious health risks.

These include heart disease due to high blood pressure and arteries clogged with cholesterol, premature death from cardiovascular disease, and a higher risk of lung, esophageal, stomach, and pancreatic cancer. (Women who are intermittent smokers have a 500 percent increased risk of lung cancer, according to the review.) Other increased risks included respiratory tract infections, delayed conception in women and poorer sperm function in men, slower recovery from torn cartilage and other injuries, cataracts, as well as increased frailty in seniors and poorer health-related quality of life. In addition, the research team noted that both light and intermittent smoking may be linked to chronic obstructive pulmonary disease, stroke, peripheral artery disease, and breast cancer, although they didn’t find enough data to confirm these associations.

More recently, a study from Northumbria University in England found damage to memory and mental health among social smokers (who were defined as those who smoke once or twice a week and average a combined total of about 20 cigarettes per week) that was equivalent to the damage that occurs in those who smoke 10 to 15 cigarettes per day and average 70 to 105 cigarettes per week.  The researchers gave memory tests to 28 social smokers, 28 daily smokers, and 28 nonsmokers and found that the social smokers performed as badly on the tests as regular smokers and that all the smokers did worse than the nonsmokers.

One of the issues mentioned in studies of social smokers is that when asked by doctors, friends and family members whether they smoke, they tend to say "no" because they don’t view themselves as smokers. This suggests that health care providers need to be more specific in questioning patients about smoking, perhaps asking whether they ever use tobacco socially.

Some experts think that increased "no smoking" zones at work, restaurants and other public venues may result in the creation of more intermittent smokers; some surveys suggest that up to 15 million smokers now fall into the "intermittent" category. Still to be settled is whether or not social smokers are addicted to nicotine. Whether they are or not, there’s no question that where your health is concerned, no amount of smoking is safe.