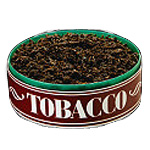 No, it is not true. Roughly 9 million people in the United States use some form of smokeless tobacco, mainly chewing tobacco and snuff. Chewing tobacco involves putting a wad of tobacco inside the cheek, while snuff (powdered tobacco) can be sniffed or placed in the mouth between the cheek and the gum. According to the National Cancer Institute, chewing tobacco and snuff contain 28 known cancer-causing agents. Of course, like cigarettes, they also contain nicotine, which is highly addictive.

Because they are not inhaled, these products may not lead to lung cancer, but they have long been associated with increased risks of cancer of the mouth, esophagus and pancreas. Use of smokeless tobacco can also increase risks of heart disease.

In 2012, researchers from the University of Minnesota presented compelling evidence that one of the nitrosamines found in smokeless tobacco is a strong oral carcinogen. The findings were presented at the national meeting of the American Chemistry Society. The investigators isolated the substance as (S)-NNN, one of the many tobacco specific nitrosamines that are formed during the growing, curing, fermenting, and aging of tobacco. (Other nitrosamines are found in processed foods such as beer, bacon and other cured meats, as well as in rubber¸ pesticides, and some cosmetics.) The researchers reported that the nitrosamine levels in smokeless tobacco are much higher than they are in foods.

The Minnesota team identified the substance after giving lab rats low doses of two forms of (S)-NNN for 17 months. That amount is roughly equivalent to what a human would ingest as a result of consuming half a can of smokeless tobacco daily for 30 years. Exposure to (S)-NNN prompted the development of both oral and esophageal tumors in the rats.

In addition to the risk of cancer posed by these products, Dr. Hecht said that users are exposed to a variety of other carcinogens that can damage their genetic material, impairing its normal function. He recommended lowering levels of (S)-NNN to below 10 parts per billion, so that amounts would be more consistent with the levels of nitrosamines in food.

Bottom line: there’s no safe way to use tobacco.