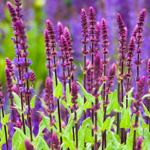 You’re referring to Salvia divinorum, a psychoactive herb in the mint family that has gotten a lot of press recently, particularly after singer Miley Cyrus allegedly celebrated her 18th birthday by smoking it, an event captured on video. You can find many similar YouTube clips of young people under the influence of salvia, which can bring on a short-lived but intensely disorienting high. Salvia grows in Mexico and shamans there have been using the leaves in spiritual healing rituals for centuries.

Salvia’s effects range from uncontrollable laughter to a sense of confusion, feelings of flying or floating and, sometimes, loss of physical coordination. However, the herb hasn’t been found to be addictive and apart from its psychoactivity appears to be harmless, although its activity in the body and health consequences is just beginning to be investigated. In fact, the first controlled human trial of the effects of salvinorin a, the active component of salvia, was published online on December 4, 2010 in Drug and Alcohol Dependence.

The Johns Hopkins researchers who conducted the small study reported that salvia’s effects are "surprisingly strong, brief and intensely disorienting, but without apparent short-term adverse effects in healthy people." Only four volunteers participated in the study. All were mentally and physically healthy and had prior experience with hallucinogens. The researchers found that salvia’s effects begin almost immediately after the herb is inhaled, peak after two minutes and wear off after 20 minutes. They found that the drug caused no significant changes in heart rate or blood pressure, no tremors and no apparent adverse events.

That doesn’t mean that the using salvia would be safe for everyone – the lead investigator said effects would be "disastrous" if a person were driving a car but noted that few emergency room visits have been linked to salvia, probably because the effects wear off so fast. And because the high is so intense and disorienting, the investigator said that it is unlikely that many people would want to repeat the experience.

Animal studies have suggested that salvia has its effects at receptors linked to part of the opioid system involved with dulling pain, but does not affect the same combination of opioid receptors in the brain as those targeted by morphine and heroin. The Hopkins researchers are optimistic that medications based on salvinorin a could prove to be effective treatments for pain and possibly improve treatment of such disorders as schizophrenia, depression or Alzheimer’s disease.

Legally speaking, the U.S. Drug Enforcement Administration views salvia as a "drug of concern," but hasn’t moved to make it a controlled substance. However, several states have banned salvia because of its psychoactive effects and legal controls have been placed on it in a number of other countries including Australia, Japan and some European nations.

Legal or not, I know a number of patients who have had terrifying experiences with salvia and salvinorin a, and who say they would never try it again.