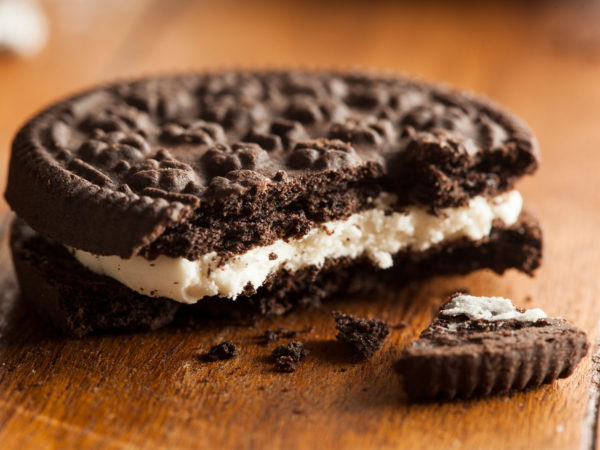 The Oreo study generated a lot of headlines and collected a lot of sound bites when results were announced in October 2013. (The findings are scheduled to be presented at a Society for Neuroscience conference in November). For those of you who missed it, here’s the gist: researchers at Connecticut College decided to study how lab rats respond to high-fat, high-sugar foods and picked Oreos as an example of a food that is “palatable to humans and contributes to obesity in the same way (that) cocaine is pleasurable and addictive to humans.”

They put the rats in a maze – at one end were Oreos and at the other end, rice cakes, which didn’t generate much enthusiasm on the part of the rats. However, the researchers found that the rats were readily attracted to the Oreos and, given a choice, would hang out at the end of the maze with the cookies. Then they compared the brain responses of Oreo rats with other lab rats receiving injections of cocaine or morphine. They found that eating the Oreos activated more neurons in the brain’s “pleasure center” (the nucleus accumbens) than did exposure to the scheduled drugs. Among the tests was one to measure expression of a protein called c-Fos that is a marker of neuronal activation in the pleasure center, and that’s how they learned that Oreos activated significantly more neurons than cocaine or morphine.

Novel as this study may be, it isn’t the first to show the highly addictive potential of sugar. In 2008, researchers at Princeton University demonstrated that lab rats accustomed to sugar display the cravings and relapses associated with addiction, as well as brain changes similar to those seen with human addiction to narcotics and nicotine. The same study showed that rats deprived of sugar exhibited anxiety characteristic of withdrawal.

Another study, from the Monell Chemical Senses Center in Philadelphia, found that children’s response to intense sweet taste is related to a family history of alcoholism and a child’s own report of depression. The investigators noted that sweetness and alcohol activate many of the same reward circuits in the brain.

While we can’t say on the basis of any of these findings that humans can become as addicted to sugar as they can to drugs, we know that individuals can experience very strong cravings that they describe and characterize as “addictions.” You can try to control cravings by paying attention to what sets them off and then focusing your attention elsewhere. Hypnotherapy can help, too, and if stress is a factor, breathing techniques or progressive relaxation as well as getting more exercise can make a difference. In addition, mindfulness meditation has been shown to help reduce the frequency of compulsive binge eating in some individuals.