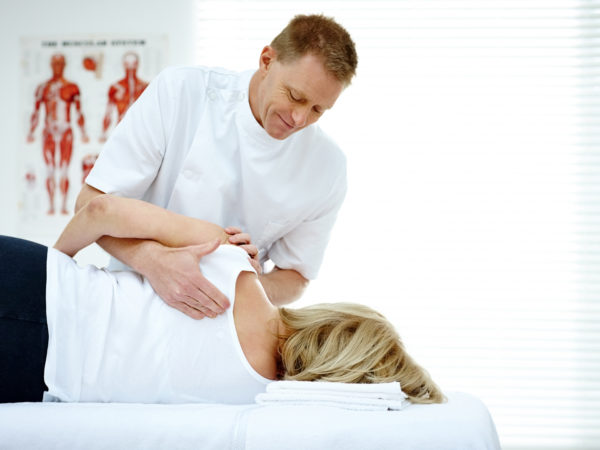 What is chiropractic?
Chiropractic, that is, treatment that uses the hands to manipulate the body, remains one of the most widely used forms of manual medicine. (The word “chiropractic” comes from Greek roots meaning “done by hand.”) Although it was formally introduced in 1895, chiropractic, along with osteopathy, follows the tradition of hands-on manipulation that dates back to ancient systems of treatment in China, India, and Egypt. Originally, chiropractic therapy focused entirely on the spine and on the notion that minor slippages (called subluxations) of vertebrae would pinch spinal nerves and lead to a variety of diseases. Although this concept is now considered incomplete and somewhat obsolete, today’s chiropractors still concentrate on spinal manipulation as a means of relieving pain, including chronic low back pain, neck pain, tension headaches and, sometimes, pain in the knees, shoulders and elbows.

What is chiropractic therapy used for?
Back pain ranks among the most common problems that bring people to chiropractors. In fact, according to Michael Menke, a chiropractor who works with the Arizona Center for Integrative Medicine at the University of Arizona, one out of every three people who suffers from low back pain seeks chiropractic care, making it the most utilized healthcare practice outside of conventional medicine.

Chiropractic spinal manipulation has now had about three decades of very active research, and hundreds of studies have been published in peer-reviewed medical journals examining its clinical usefulness. Spinal manipulation has been found to be effective in the treatment of low back pain (particularly chronic pain), neck pain, muscle tension headaches, and several other conditions. Performed properly, it can relieve musculoskeletal discomfort as well as improve the circulation of blood.

There are also uncontrolled case reports of successful chiropractic treatment for middle ear infections, bedwetting and asthma. To date, these reports have not been critically examined. The persistence of these stories among chiropractic clinicians suggests that occasionally patients with these conditions receive benefit from chiropractic intervention, though each patient must be examined on a case-by-case basis. More research and clinical trials are needed to confirm which of these conditions respond favorably to chiropractic management.

What should one expect on a visit to a chiropractor?
There are, in fact, many forms of chiropractic manipulation. All of them focus on correcting structural misalignments in the body to alleviate discomfort. Upon entering a chiropractic office, you may immediately be seen by the practitioner, or you may first be seen by a massage therapist, physical therapist or trainer. Health care practitioners who work with chiropractors will often perform soft-tissue mobilization techniques such as massage or trigger point therapy in addition to using other techniques like ultrasound and laser-guided therapy, applying ice or heat to areas of discomfort or using traction.

When receiving a chiropractic manipulation, patients typically will lie or sit on a table that can be configured in various positions allowing the practitioner to access different parts of the body. The method most used and typically associated with chiropractors is known as the “dynamic thrust” method: a low speed, high force movement (often accompanied by a popping or cracking sound) used to adjust and realign the vertebrae. This technique may cause a feeling of anxiety followed by relief and contentment; however, in some individuals it can cause discomfort and, rarely, injury.

Additionally, there are low-force, high-speed chiropractic techniques available that can yield positive results. One of these is known as the Activator method. Practitioners trained in this modality use a handheld device incorporating a tension spring and plunger that produces a pulse of low force at high speed.

Chiropractic sessions using this technique are safer and less painful than those employing dynamic thrust manipulations. Because the head is kept in a neutral position, rather than turned or twisted, there is minimal risk of injury. This method is also quick – typically, a patient can be assessed and treated in less than 15 minutes. As with other chiropractic techniques, there may be immediate pain relief, but best results often come from several adjustments over a period of two weeks or more.

Are there any side effects or indications where chiropractic therapy should be avoided?
Chiropractic therapy is not recommended for people with serious bone problems, such as osteoporosis, bone or joint infections, bone cancer, acute rheumatoid arthritis and diseases of the spinal cord or bone marrow. The rare complications that have been reported from chiropractic care have primarily occurred from the traditional high pressure, low speed manipulation. Other chiropractic methods, such as the Activator Method, utilize techniques that may be more appropriate for children and the elderly.

Is there a governing body that oversees or credentials practioners in chiropractic therapy?
The modern chiropractor has considerable expertise with backs, muscles, and bones. But chiropractors are also trained to recognize other general health care problems, to give general health advice, and refer you to medical physicians when appropriate. The typical chiropractic curriculum takes about four and one-half years at a licensed chiropractic school, after completing required undergraduate college pre-requisites. It includes many of the same courses that medical students are required to attend. The medical and chiropractic professions differ in their respective requirements for completing residencies and specialty training.

There are state statutes that govern chiropractic therapy. Each state has a Board of Chiropractic Examiners. In order to practice chiropractic, one must pass a board certification process specific to the state in which he or she will be practicing. Governmental health care programs such as Medicare, Medicaid and Federal and State Worker’s Compensation programs all recognize chiropractic and compensate for treatment. Federal student loan assistance is also available to students of chiropractic.

The National Institutes of Health (NIH) has taken a leading role in examining chiropractic and other “alternative medicines” through its National Center for Complimentary and Alternative Medicine (then named the Office of Alternative Medicine) in 1992. It continues to fund studies and review clinical outcomes.

How does one find a chiropractor?
To find a good chiropractor, ask for recommendations from friends, family members or from your primary care physician. Make sure any practitioner you choose has a degree from an accredited four-year chiropractic college. Avoid anyone who tries to lock you into long-term treatment or asks you to sign a contract. You can also look for chiropractors in your area via the American Chiropractic Association, the International Chiropractors Association, or by locating a specially trained Activator Methods Chiropractor.

Are there other therapies that might work well in conjunction with chiropractic therapy?
Massage therapy that focuses on eliminating muscle spasm and trigger points – areas of irritability in the muscle that may feel like lumps or knots – can be a useful adjunct with chiropractic therapy, and is sometimes used in a chiropractor’s office prior to treatment. This technique applies concentrated pressure to trigger points that are often painful and can sometimes lead to referred pain in other parts of the body. Application of sufficient pressure to these areas for a long enough period of time (usually 45-60 seconds) can allow these tight places in the muscles to relax with subsequent improvement in pain and muscle tightness. Stretching techniques and exercises at home can often help to normalize muscle anatomy and its attachment to bones. Used in conjunction with chiropractic treatment, this can allow maximum benefit from the adjustments and often help prevent recurrence of symptoms.

What is Dr. Weil’s view of chiropractic therapy?
Dr. Weil believes that chiropractic theory, stressing the importance of the spine on general mind and body health, and the accompanying manipulative techniques, may be of benefit in the treatment of several conditions, particularly for back and neck pain. If you haven’t tried chiropractic and have chronic back or neck pain, a few sessions could prove beneficial. If treated for more than six visits, or longer than two-to-three weeks without a change in your condition or you get worse, your chiropractic treatment may not be the correct or ideal approach for your problem. You may discuss this with your chiropractor, seek the advice of another chiropractor, or try another healthcare professional. Dr. Weil also recommends avoiding or at least minimizing the routine use of X-rays by chiropractors to diagnose spinal misalignment.

A chiropractor who looks beyond the spine can be a useful resource for restoring and preserving health. For a specific complaint, feeling better is the sign of successful treatment. Excellence in chiropractic practice includes recommending lifestyle changes, including home-based exercises, stress-reduction techniques and sound dietary advice that may include the prudent use of supplements. Treatment should leave you feeling more competent to care for yourself, and most of all, it should result in your feeling better promptly.

The Activator method has undergone clinical trials that demonstrate its efficacy. Dr. Weil has found these low-force treatments to be reliable and safe, and recommends them to his patients, particularly for use in the pediatric population and in the elderly.