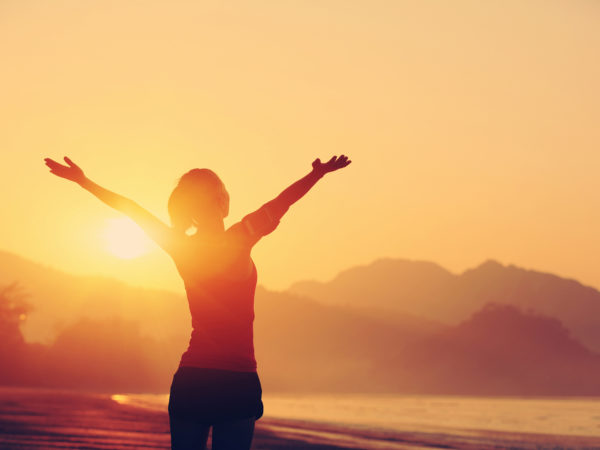 Sherry Williams removes her stylish black hat, revealing hair short enough to pass muster at a Marine boot camp. She says that after her last round of chemotherapy, “Everybody kept telling me how good I looked bald.” So even after her hair began growing back, she decided to go with a buzz cut.

“I save all of that time I used to spend at the beauty shop!” she says, laughing. “This is low maintenance. Once you go through all of this, you don’t have the same priorities.”

Such perspective was hard-won. From 1999 to 2004, Williams was diagnosed with breast cancer four times. How she ultimately found healing via the Arizona Center for Integrative Medicine – the teaching fellowship and clinic Dr. Weil founded at the University of Arizona’s School of Medicine in Tucson – is a story she is now eager to share. But it is not always easy – one of her toughest challenges these days is persuading people that she was ever sick.

“People say to me, ‘You don’t look like somebody who’s had cancer four times,'” she says. “I say back, ‘What am I supposed to look like?'” But one can sympathize with her puzzled acquaintances. Williams, 48, is a font of boundless energy, almost bouncing as she crosses the courtyard of her manicured Phoenix apartment complex to shake my hand. Her eyes are clear, her voice is strong, and she laughs heartily and often. She says she “fatigues more easily” than before, but is biking, lifting weights, working full-time and getting on with her life.

An Atlanta native, she moved to Chicago in the mid-1980’s and worked as an independent contractor for a cosmetics company. She was always a whirlwind of energy and activity, and embraced a healthy lifestyle. “I played on two tennis teams. I cycled on the lakefront,” she says. “I didn’t smoke or drink. I was eating pretty good.” But in March of 1999, four months after she turned 40, her doctor found a pea-sized lump in her right breast. The biopsy revealed it was malignant. She opted for a lumpectomy and removal of 13 lymph nodes. Despite support from her deep religious faith and large family, the follow-up radiation and chemotherapy regimen was grueling: “It felt like a Mack truck ran over me, backed up, and ran over me again.”

Then, nine months after her first diagnosis, she unexpectedly bled from her left nipple. “So instead of my last chemo session, I’m getting a biopsy.” The next week, the news came back: malignant. “I was devastated. I just lost it,” she says. “Now I had cancer on the other side.” Williams underwent a bilateral mastectomy – removal of both breasts – with reconstruction using abdominal tissue, on January 21, 2000. “It took until August for me to start feeling better, and September to get back to working full time.”

In February of 2001, tired of the brutal Chicago winters, she moved to Phoenix and, she hoped, a new, cancer-free life. But in January of 2002, a lump she found just below her reconstructed left breast tested malignant, leading to five surgeries in five months to remove tissue and insert a drug port for chemotherapy.

“I was thinking, hmmm, the Lord must really have something good out there waiting for me at the end of all of this,” she says with a smile.

Then came the final assault. In March of 2004, she felt a nagging pain in the chest wall on the right side of her left breast. She hoped it was muscle soreness from her health-club workouts. “I was thinking, ‘This isn’t cancer, because the other three cancers did not hurt. This hurts.'” But doctors found two malignant lumps in July of 2004.

“The surgeon took out everything that he could,” she says. Then her oncologist recommended radiation to eradicate any remaining cancer cells.

It was the last straw. She was bankrupt (she filed in March, 2002), exhausted and stressed to the limit, having been through almost 20 surgeries and multiple rounds of radiation and chemo. On top of it all, since her own diagnosis, her mother, aunt and cousin had all been diagnosed with breast cancer (her mother and cousin have been treated and recovered, her aunt died two years ago from other health issues).

It was time, she says, for some changes. She wondered: could the radiation itself be the problem?

“When I asked my radiation oncologist if radiation could cause other cancers, he said that some studies had shown it could be true.” That’s when Williams decided to find a radiation-free way to keep a recurrence at bay.

In the course of her long treatment odyssey, she had been to several “alternative” healers, but came away unimpressed, feeling they were more interested in making money than making her healthy. What she wanted, she says, was “the M.D. and the alternative all in one.”

Finally, a friend in her support group told her about the Arizona Center for Integrative Medicine (AzCIM) clinic in Tucson. She had already read Dr. Weil’s book, Eight Weeks to Optimum Health, and felt that “this was just what I had been looking for.”

She told her oncologist, “I did everything you guys told me to do three times and I still got it again. I am trying something else now.” The oncologist was dubious about AzCIM, but Williams did not waver, proclaiming: “I am not asking for your permission. I am just telling you what I am doing, in case you want to write it on my chart.”

In November of 2004, Williams sat down with Victoria Maizes, M.D., director of AzCIM. It was, Williams says, a radically different medical exam.

“First, the room isn’t all sterile and cold, with the fluorescent light,” she says. “There’s a table, a lamp. It’s homey, relaxed, tranquil.”

“You fill out a 10 or 15 page form, and they ask you everything – surgeries, history, background, how much sleep do you normally get – I never had a doctor ask me about sleep before. They have you keep a food journal, where you write everything you eat, even one cookie, you write it down. Nobody had really asked me for details about what I ate before, either.”

Her initial consultation with Dr. Maizes lasted two hours, as opposed to just a few minutes with some of her previous physicians. “What struck me was that she really listened….she would ask a question, then wait for a response. She was remembering what I said.” The conversation ranged across Williams’ life: her background, emotions, religious faith, the whole constellation of who she was and who she wanted to be.

“I enjoyed the whole experience,” she says.

The three-page list of recommendations Dr. Maizes gave Williams included some standard prescription medications such as Arimidex to reduce the risk of breast cancer recurrence (Maizes did not take over as Williams’ primary physician, but rather recommended that Williams switch from Tamoxifen to Arimidex, a move her physician had agreed would be acceptable). But the rest of the three-page list, which Williams keeps on her refrigerator at home and adheres to closely, is definitely outside the ken of typical doctor’s advice. A sampling: keep nurturing the spiritual part of yourself, drink 4-6 cups of green tea and eat 7-9 servings of fruits and vegetables daily, use guided imagery to help with sleep problems, take astragalus root.

To date, Williams has been to the AzCIM clinic twice, and stays in touch via telephone when she has a question. Two years after that first consultation, she says, she remains cancer-free without radiation.

These days, Williams divides her time between her cosmetic company responsibilities and sharing her story with other women in churches, civic groups, and “whatever groups will listen.” She stresses the importance of breast self-examination, particularly to African-American women – studies show that, while Caucasian women are more likely to develop breast cancer, African-American women are more likely to die from it. She has written a small book – When Cancer Calls – and is working on a larger one describing her cancer journey.

And, she says, “I always tell people to go to DrWeil.com and the AzCIM Web site.” Making the appointment with AzCIM, she says, “is probably the best thing I ever did.”