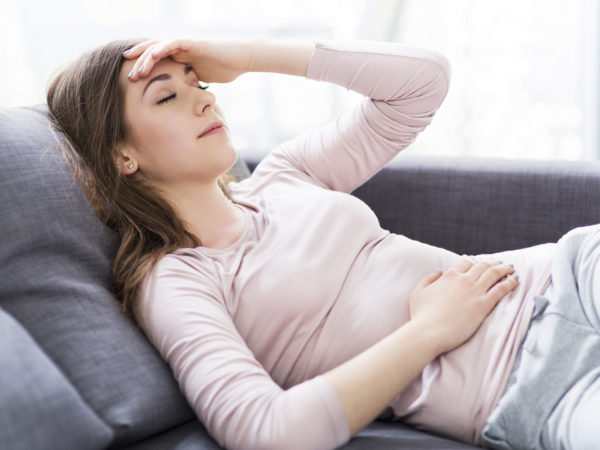 “Syncope” (pronounced SIN-koe-pee) is the medical term for fainting and “presyncope” describes the feeling that you’re going to faint (but you don’t). This feeling sometimes includes dizziness, light headedness, blurred vision and weakness and usually is related to “orthostatic hypotension,” a drop in blood pressure that occurs on standing up suddenly.

Dizziness may be brought on by the hormonal changes during menstruation that affect the tone of blood vessels, so that may be what underlies your presyncope episodes. The hormonal changes of menopause have also been reported to cause bouts of dizziness and vertigo, which sometimes are associated with other menopausal symptoms (such as hot flashes and anxiety) and sometimes not.

At any rate, episodes of presyncope related to the menstrual period do not appear to be unusual. Fainting spells around the time of the menstrual period aren’t unusual either. These can disappear only to reappear during or after pregnancy.  In addition, feeling faint can be related to anxiety, hyperventilation, migraine headaches as well as colds, flu and stress.

Fainting itself usually is not serious. Some people faint at the sight of blood. It is possible to faint from coughing too hard, during a bowel movement or urination or just from standing up too long. Fainting can be a side effect of some medications, including those used for anxiety, depression, high blood pressure, low blood sugar and allergies (these drugs may cause a drop in blood pressure). Emotional distress, fear and severe pain are also possible causes.

Feeling faint is the result of a temporarily inadequate blood supply to your brain. Sit down or lie down. If you sit, put your head between your knees to bring blood flow back to the brain.

The fact that you have had tests that have ruled out any heart-related problem that might underlie your presyncope episodes is reassuring. To avoid “feeling faint” when you stand up, the best advice I can give you is to stand up slowly, rather than suddenly. Fortunately, presyncope such as you describe usually is of no medical consequence. Since your episodes are associated with your menstrual period, you can anticipate when they are most likely to occur, and be especially careful at those times to avoid sudden changes in position.