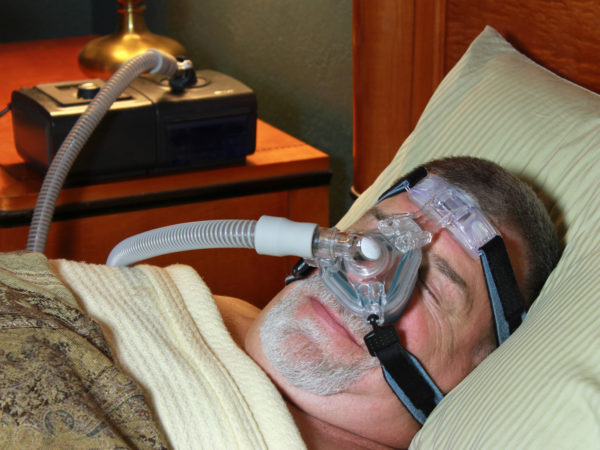 CPAP stands for “Continuous Positive Airway Pressure.” A CPAP device is commonly used to treat moderate to severe sleep apnea, a disorder that interrupts breathing during sleep. The CPAP holds airways open by delivering pressurized air through a mask into the nose and mouth during sleep. I generally recommend the use of a CPAP machine for sleep apnea patients, although it must be used every time you sleep or symptoms will return.

I discussed your question about inhalants with Dr. Randy Horwitz, medical director of the Arizona Center for Integrative Medicine, and an expert on CPAP use. He noted that with this device, the air pressure is considerable – much higher than when simply inhaling steam. This can propel droplets deep into the lungs, which is a concern if you use oil-based inhalants (such as essential oils). Even a small amount, Dr. Horwitz said, might cause lung irritation.

He also noted that normally a CPAP machine is used during the six to nine hours that you sleep, which is quite different from a few minutes of steam inhalation. He said he would be concerned about the effects of overexposure to an inhalant.

Dr. Horwitz also said he wasn’t sure how much of the dose would treat the bronchioles (small airways), versus coating the nasal and bronchial mucosa. When you inhale steam, it coats and soothes the whole upper respiratory tract. With CPAP’s very powerful airflow the “steam” doesn’t get the chance to linger in the nasal passages and upper bronchioles.

On a final note, Dr. Horwitz mentioned the need to use only distilled water in your CPAP machine and to clean it regularly to avoid mold and contaminants.