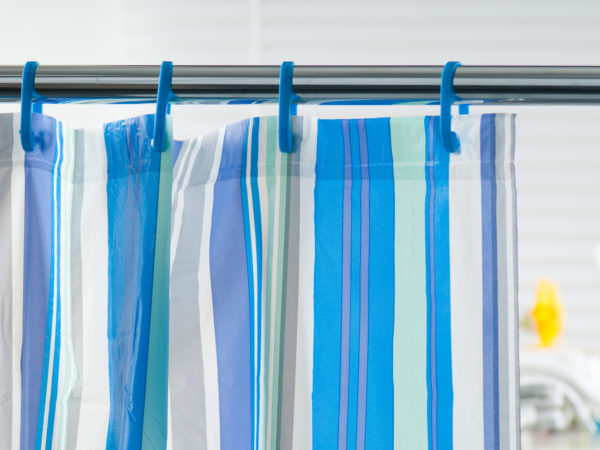 Many shower curtains and shower curtain liners are made with polyvinyl chloride (PVC) plastic, which contains a number of toxic chemicals. If your shower curtain emits the characteristic “new shower curtain smell,” you can be pretty sure that it was made with PVC. The chemicals released as volatile organic compounds (VOCs), may cause respiratory irritation; damage to the central nervous system, liver and kidneys; nausea, headaches, and lack of coordination. The most common symptoms that occur with exposure to VOCs include eye irritation, nose and throat discomfort, breathing problems, allergic skin reactions, headache, nausea, vomiting, fatigue, dizziness and nosebleeds.

In June 2008, the Center for Health, Environment and Justice, a nonprofit environmental organization reported on a study that found that new shower curtains released 108 VOCs into the air over 28 days, and that after a week 40 VOCs were detected in the air. The number dropped to 16 after two weeks, 11 after three weeks and four after four weeks. The study also found that over seven days, one new PVC shower curtain will release VOCs that exceed the guidelines for indoor air quality established by the U.S. Green Building Council. And it noted that the testing didn’t replicate temperature and humidity typically found in bathrooms during showers, which would likely increase the concentrations of VOCs released into the air.