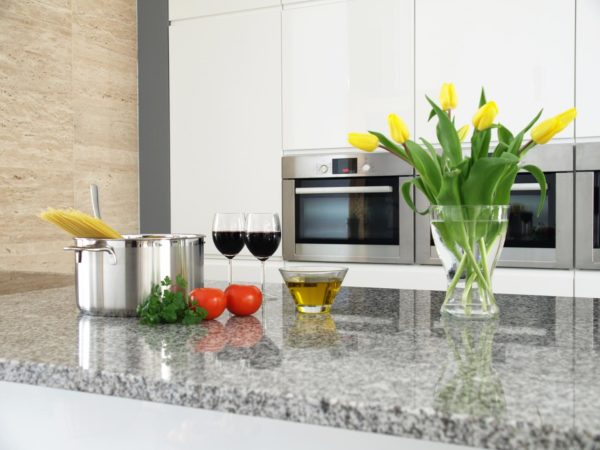 The story here appears to be that some granite countertops have been found to emit high levels of radon, a strongly carcinogenic natural radioactive element. Radon is an odorless, colorless gas produced by the breakdown of uranium that seeps out of the earth, more commonly in some places on the planet than others. It sometimes enters basements through concrete cracks and becomes trapped there, concentrated in the air that we breathe.

Some granite and other natural stones contains trace amounts of uranium. If it emits radon, it typically does so at very low levels. However, in some instances, tests have found that granite countertops give off potentially dangerous levels of radiation. The New York Times reported in July 2008 that the increased popularity of granite countertops over the past decade has resulted in an expansion of the kinds of granite available and that reports of “hot” countertops seem to come from “the more exotic and striated varieties from Brazil and Namibia.”

However, allegations that granite countertops are radioactive and can emit radon gas are not new. They have been raised periodically, mostly by manufacturers and distributors of competing countertop materials as well as the manufacturers of radon detection devices. But the extent and significance of the problem is unknown. The Marble Institute of America (MIA) sponsored a study of 13 granite samples said to be representative of 95 percent of the countertops on the market. Conducted by a geologist from the University of Akron, the study showed that 10 of the 13 samples tested emit only insignificant amounts of radon; of the other three, one added only about seven percent of the amount of radon the U.S. Environmental Protection Agency deems “actionable” (in other words, the levels you should do something about, by installing venting systems for example). The other two granites tested added only one percent of the EPA action level.

On the other hand, according to the Times, preliminary results of another study at Rice University suggest that all of the 55 samples tested emit radiation at higher-than-background levels, some at 100 times background levels.

If you’re interested in exotic granite, or worried about your existing countertops, testing for both radon and radiation makes sense. And note that the EPA advises that all homes be tested for radon – regardless of countertop material. If significant levels are found, you’ve got to do something about it to protect your family’s health. For EPA information on radon, go to http://www.epa.gov/radon/pubs/citguide.html. To see the MIA study on granite, go to http://www.marble-institute.com/industryresources/radontesting_u-akron2008.pdf (pdf, Adobe Acrobat Reader required)