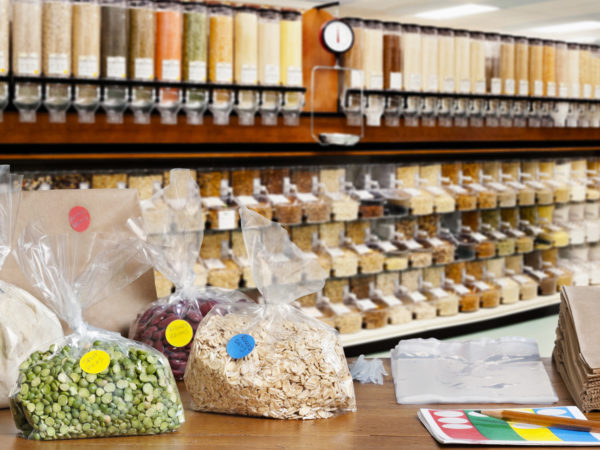 We’ve all seen the bulk food sections of grocery stores and supermarkets – that’s where you find dispensers of coffee beans, rice and other grains, nuts, dried fruits, pasta, beans, some types of candy and various other foods. This system lets you buy the amount you want by weight rather than be limited to packages of foods that may contain too little or too much for your needs.

Buying in the bulk food section can be especially economical when you want to try something new, like a grain you’ve heard about but never tasted. You can measure out enough to make one recipe and come back for more during your next shopping trip if you and your family like it.

A 2012 Portland State University Food Industry Leadership Center study found that buying organic foods in bulk led to average savings of 89 percent compared to the cost of the same food in packages. Consumers told the Portland State researchers that they waste less food when they buy bulk items. This makes sense. Who hasn’t found a forgotten (and stale) half full package of some food bought for a recipe you’ve made only once and then shoved to the back of a kitchen shelf? According to bulkisgreen.org, a national non-profit organization dedicated to raising awareness of the economic and environmental benefits of buying in bulk, the quality of the food is as good as – or better than – the same food sold in packages; often, both bulk and packaged foods come from the same source. The organization also notes that to keep bulk foods fresh, many dispensing systems automatically rotate the product, adding new inventory to the back or bottom so that the items you draw out of the bins haven’t been stationary for months.

I think we’re going to be hearing more about the benefits of buying bulk foods. Shoppers can’t help but recognize the enormous amount of waste from the food packages they toss out daily. All the paper and cardboard we throw into the trash come from uncounted trees, and making those packages required the outlay of immense amounts of energy.

To maximize the environmental advantage of bulk purchases, ask your merchant if you can bring your own washable containers. Some stores even allow you to use your own sturdy glass containers – they will mark the “tare” or empty weight on the container, and subtract that from the total weight at checkout.