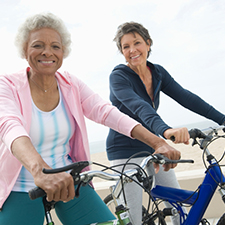 Pedelecs are like regular bikes, but with electric motors that help you pedal as you ride. They’ve been growing in popularity during the past decade, especially in Europe and Asia, and there’s now increasing interest in the U.S. The motor in these bikes is designed to assist you up to speeds of 20 miles per hour. If you want to go faster, you’ve got to provide the extra power yourself. You can also use a pedelec as you would an ordinary bike and just switch on the motor if you need it for riding uphill or against the wind.

There’s still some confusion of terminology relating to bikes with electric motors. For the record, pedelecs are defined as bikes in which the motor can be activated only by pedaling, while E-bikes are those in which a handlebar throttle activates the motor; you can ride them without pedaling if you wish.

I haven’t seen many studies of whether or not riding a pedelec can give you an effective workout. However, results from an investigation at the University of Colorado, Boulder are encouraging. Researchers there looked at the effects of riding pedelecs regularly in a group of 20 sedentary volunteers who normally commuted to work by car. First, the team checked the volunteers’ body composition, blood pressure and blood glucose regulation as well as their overall fitness. Then they asked the group to ride pedelecs to work at the speed and intensity of their choice for at least 40 minutes 3 times a week. While riding, the volunteers wore heart monitors and a GPS device.

A month later the volunteers returned to the lab for a series of medical tests. Results showed improvements in cardiovascular health, including increased aerobic capacity. Blood sugar control had also improved. The researchers concluded that pedelecs “are an effective form of active transportation that can improve some cardiometabolic risk factors within only 4 weeks.”

An interesting aspect of this study is that the pedelec riding substituted for driving or riding to work, rather than requiring the volunteers to set aside time for exercise. The GPS data showed that the volunteers rode at an average speed of 12.5 miles per hour with no reported accidents.

A cautionary note about the use of electrically powered bikes comes from a study in the Netherlands showing that these riders are more likely to be involved in crashes that require emergency room treatment than riders of conventional bikes, although the injuries sustained on both types of bikes were about the same.