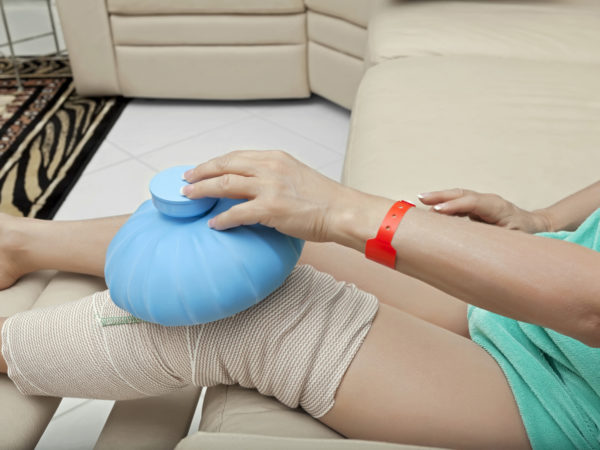 The IT (iliotibial) band is a group of tough fibers that stretches along the outside of the thighs. It helps stabilize you when you’re running and can become inflamed and irritated by overuse. The pain this causes usually is felt on the outer knee or the lower part of the thigh and feels worse when you’re walking up or down stairs or getting out of a car.

You’re most likely to develop IT band pain if you run on only one side of the road. When you do this, the foot that is on the outside slope of the road is often lower than the other foot, a position that tilts the pelvis and stresses the IT band. Other possible causes are excessive pronation (the way your ankle rolls inward and your foot rolls outward when you land on it while running), a discrepancy in the length of your legs (one is slightly longer than the other), a lateral pelvic tilt (one side of the pelvis is lower than the other), bowed legs, and tight gluteal (buttocks) muscles or tight quadriceps (the big muscles on the front of the thigh).

The Graston Technique® is an unproven method of treating injuries by breaking down scar tissue that causes pain. Practitioners use six stainless steel instruments instead of their hands to find the scar tissue. In essence, the technique involves further damaging the affected soft tissue in the belief that this will promote healing. This method is an offshoot of “soft tissue mobilization,” a physical therapy technique for which there is sparse supporting evidence.

The best research we have for demonstrating the efficacy of the Graston Technique comes from a study in mice that showed some benefits in terms of new tissue formation, but no effects on healing. A search of the medical literature for “Graston” yielded 13 articles, mostly case reports, which describe of the use of the technique on one or more patients. These are not studies – the authors are not comparing one treatment method against another to learn whether a new approach works better than an old one, or better than none at all. One of the articles described the design of a proposed trial of the Graston Technique; another was a pilot study comparing the Graston Technique to manual soft tissue mobilization in the treatment of carpal tunnel syndrome: it concluded that both methods worked.

If I were you, I would stay away from the Graston Technique. In my view, it lacks solid scientific support demonstrating its safety and effectiveness. The standard treatment for IT band pain is rest, ice, elevation and over-the-counter anti-inflammatory medication such as ibuprofen. If those methods don’t help, you may want to try physical therapy and learn specific stretches to relieve pain in this area. The practitioner may assess your running form and recommend particular shoes that could help correct any imbalances. The best approach may be to enlist the help of a knowledgeable sports therapist to figure out what caused the problem in your case so you can avoid further episodes.