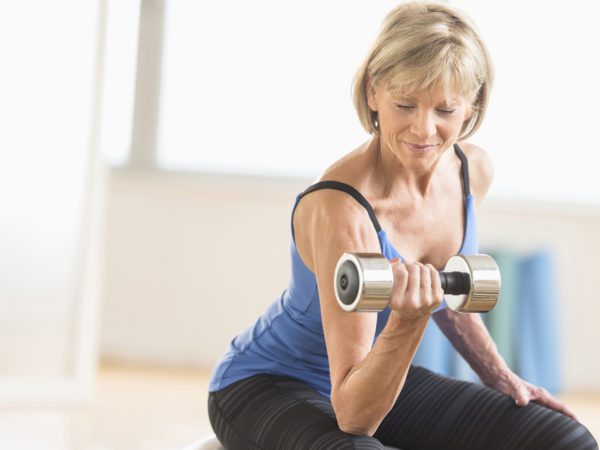 A study from the University of British Columbia in Vancouver does suggest that light resistance training with weights can slow changes in the white matter of the brain associated with aging. These changes – actually lesions or holes in white matter – begin to develop in late middle age in most people and can affect thinking and memory, although outward signs may not be obvious for some time. The Canadian researchers who conducted the study noted that the more of these changes seen on brain scans, the poorer the thinking skills of the affected individuals compared to abilities displayed by older people whose brain scans show fewer changes. What’s more, the investigators noted that age-related changes in gait – the speed and steadiness of your walk – are believed to be related to declining brain health, including white matter changes, and that gait changes may even contribute to worsening brain health.

Some studies have shown that aerobic exercise benefits the brain, but the new study explored the effects of light weight training. Weight training that strengthens muscles might result in improved gait, which in turn might lead to fewer white matter lesions.

The researchers focused on a group of 54 women ages 65 to 75 who were participating in an ongoing brain health study and had already undergone scans showing lesions in their brain white matter. First, the investigators assessed the women’s gait speed and stability and then randomly assigned them to a group that performed supervised upper and lower body weight training once a week, a second group that did the weight training twice a week and a third group (the controls) that did stretching and balance training twice a week. After a year of these weekly sessions, the women had repeat brain scans and a reassessment of their gait.

Results showed that that the number and size of lesions in white matter had increased alarmingly in the white matter of the women in the control group and that their gait had slowed. The same undesirable changes occurred in the women who did the once-a-week weight training.

However, brains scans showed significantly fewer disturbing changes in the white matter of the women who did weight training twice a week, and the researchers reported that these women were able to walk more quickly and smoothly than those in the other two groups.

The study team didn’t investigate whether the differences in the white matter seen in the women who weight-trained twice weekly affected their thinking skills but plan to examine that in another study. They also hope to study whether weight training has similar effects on the male brain and to learn how it slows changes in white matter.