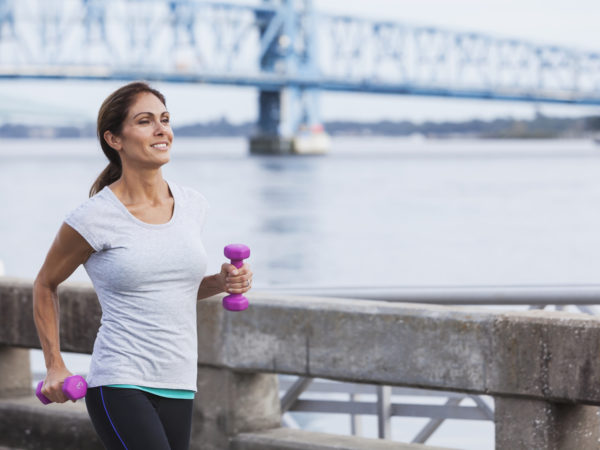 The idea that exercise is key to bone strength comes from studies showing that lack of exercise – among people who are bedridden, for example – leads to bone loss. However, there isn’t much evidence that common forms of exercise, such as walking, actually build bone.

The best way to avoid the age-related loss of bone mineral density (osteopenia) that may progress to osteoporosis is to build strong bones early in life. Maximum bone mass is genetically determined and also influenced by lifestyle factors. After age 35, bone mass begins to decline slowly in both men and women. While osteoporosis is usually regarded as a women’s health issue, by age 65, men are beginning to lose bone mass at the same rate as women. Unfortunately, the consequences of bone loss and the incidence of osteoporosis in men often is not recognized and treated. Fractures among older men tend to lead to more severe disability and death than they do in women.

According to the National Institutes of Health, bone loss in most men with osteoporosis has at least one – and sometimes more than one – secondary cause. The most common contributing factors are low testosterone levels, alcohol abuse, smoking, gastrointestinal disease, long-term use of glucocorticoid medications (such as prednisone for treatment of diseases like asthma and rheumatoid arthritis), lack of weight-bearing exercise (due to prolonged bed rest following surgery, illness or fractures), or loss of calcium in the urine (resulting from a disorder called hypercalciuria).

While some studies have suggested that it is possible to reverse bone loss through exercise, the activity involved is much more strenuous than walking or even jogging. In 2015, researchers at the University of Missouri reported that both strength training (weight lifting) and jumping exercises helped a group of 38 active, middle-aged men with low bone mass improve their bone density. After six-months of these activities, there were significant increases in the men’s whole-body and lumbar spine bone mass. (Improvements in the density of the hipbone occurred only among those in the weight-lifting group.) These benefits were still measurable six months later. The weight-lifting exercises included squats, deadlifts, lunges and overhead presses, all targeted at the hip and spine. Over time, weight was increased to boost the intensity of the exercises.

Bone is constantly being remodeled by the action of opposing forces – some destructive, some constructive – in response to the stresses and demands placed on it. These changes are under precise cellular and hormonal control. Strength training causes the constructive influences to dominate. I have long recommended strength training to help maintain bone once you reach midlife, but I don’t suggest trying it on your own. You need to learn proper form as well as how and when to increase the amount of weight you’re working with.

I wouldn’t discount the benefits of walking, even though its measurable effects on bone mass may be slight. A 2002 study that included more than 60,000 women linked brisk walking at least 4 times a week with a substantially lower risk of hip fracture compared to being sedentary. And, of course, there’s no doubt that it’s good for heart health, weight control and overall health. Do keep up your daily walks.