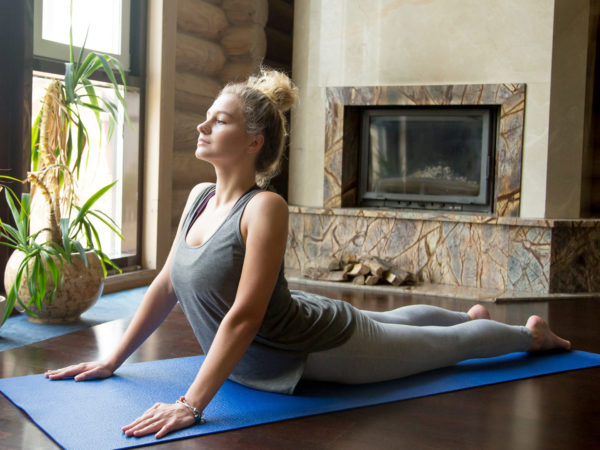 “I enjoy practicing the Cobra Pose first thing in the morning in conjunction with my breathing exercises to help open my chest and lungs. Sitting at a computer tends to contract the front of the torso; this pose reverses that effect.” – Andrew Weil, M.D.

Description & History
The Cobra Pose is a basic pose used to strengthen the spine and buttocks as well as stretch the chest, shoulders, and abdomen. The Sanskrit name of the Cobra Pose, Bhujangasana, comes from the words bhujanga, meaning serpent, and asana, meaning posture. Strength and flexibility are important components of a healthy back. By using the Cobra Pose in conjunction with other back-related yoga poses, a practitioner can develop the ability to maintain correct body posture and improve back strength.

How to Perform the Cobra Pose

Watch a video demonstration of the Cobra Pose.

Modifications & Variations
It is important to remember not to overdo the backbend during the Cobra Pose. Beginners should find a height that is comfortable and does not put excessive strain on the back. If you are stiff and do not feel comfortable with performing this pose on the floor, you can modify the pose. Start by placing a metal folding chair against a wall with the seat facing out. Place your hands on the edge of the seat and stand on the balls of your feet. Go through the same motions as you would with the Cobra Pose on the floor.

For an advanced version of the Cobra Pose, start the same as you would with the normal pose, but instead of using the arms to lift the upper body, contract the buttocks and lower back. This modified movement will limit the height at which your upper body will lift. As this is an advanced version of the Cobra Pose, it is important to know your limits and pay attention to any uncomfortable feelings associated with the pose.

Precautions
Pregnant women should refrain from performing this pose, as should individuals with active ulcers, abdominal pain and hernias. For those with neck tension or injury, do not lift the head to a level that causes discomfort. And those with back pain or injury should bend the spine only to a degree that is comfortable, keeping the elbows bent if needed. Keep the spine rounded while performing the Cobra pose and avoid bending at the hips to achieve the pose.