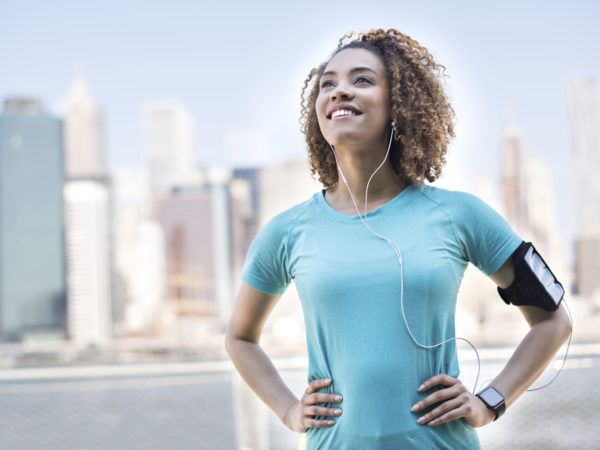 You’re not alone. Breast pain is a common complaint among female runners. The first study that I know of on the subject was published online in April 2013 by researchers at Britain’s University of Portsmouth. The investigators approached women registering for the 2012 London marathon and asked them if they experienced breast pain while running. They gathered responses from 1,397 women, about a third of whom said that their breasts frequently were sore during their runs. However, many attributed the pain to hormonal changes linked to the menstrual cycle rather than to exercise.

Even so, the research team found that the women who reported the most exercise-related pain were those with the largest breasts; more than half of the runners who wore an “F” cup or larger said that they had frequent breast pain. In addition, about 25 percent of the women who wore an “A” cup or smaller said that they often had breast pain associated with running. Many of the women told the researchers that they cut back on exercise when their breasts were sore, walking instead of running, or skipping workouts entirely. Altogether, the investigators collected data on women with 56 different bra sizes, from an AA to a HH, and with chest bands ranging from 28 to 40 inches. The average bodyweight among the study participants was 148 pounds.

All told, a third of the women surveyed reported breast pain during exercise. Nicola Brown, lead author of the study, told the New York Times that a well-fitting supportive bra has been shown to lessen breast pain in about 85 percent of women who have this problem. Reportedly, 85 percent of all women (in the U.S.) are also wearing the wrong size bra (70 percent in the U.K.), but whether this statistic is true or simply a marketing tool used by bra manufacturers is unknown. The University of Portsmouth has published a guide to finding the right size bra (whether or not you run).

The researchers have found that unsupported breasts move an average of nearly four inches in three directions (up and down, side-to-side, and forward and backward) during running, which is why some women experience exercise-related breast pain. The group said that sports bras can effectively reduce breast movement during exercise by up to 73 percent (compared with wearing no bra) and lessen breast pain caused by running. If the sports bra you’re wearing isn’t helping, you might look for a new one in a store where you can be fitted correctly. The study was published online on April 19, 2013 in the British Journal of Sports Medicine.