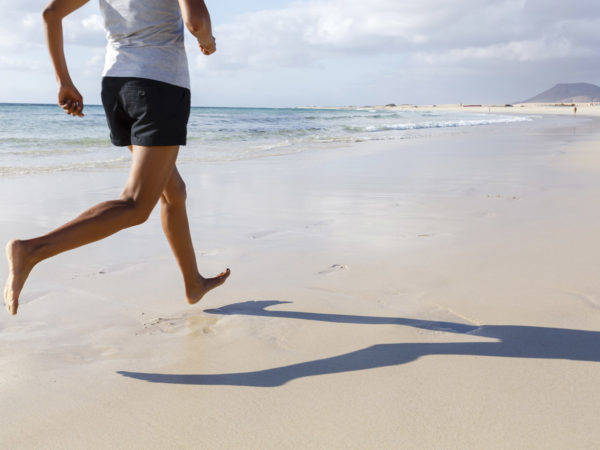 I first wrote about this topic in 2011 when the question you ask was being hotly debated in the running world. A number of champion runners have made their mark in bare feet, and obviously, before there were shoes, humans who ran did so without them. The main argument in favor of barefoot running is that it causes you to land on your forefoot rather than the heel, as you do when running in shoes. That is supposed to be less jarring and therefore less likely to lead to injuries.

In 2011, there were no studies comparing the risks of injuries of barefoot v. shod running. Happily, we’re now better informed, thanks to two studies published this year (2013).

One, from Brigham Young University in Provo, Utah, found that runners who wore minimalist barefoot-style shoes suffered more injuries than those who wore conventional running shoes. The researchers instructed those in the “barefoot” group to start by running one mile the first week and then gradually increase the distance they ran by one mile over the next two weeks. After that, they could add as many miles as they liked. All the runners in both groups had MRIs at the outset of the study and again at its end. The original MRIs showed that the participants had normal feet and legs, but the imaging studies done 10 weeks later showed that half the runners wearing the minimalist shoes had injuries – ranging from swelling and fluid accumulation to stress fractures. Those athletes were also running fewer miles at the end of the 10-week study than they had at the outset, “probably because their feet hurt,” in the words of one researcher. No comparable injuries were reported for the runners who wore shoes.

The second study, from the University of Calgary in Canada, looked at published research examining the effects of barefoot running on foot motion, training, running economy and injury. It found no evidence of reduced risk of injury attributable to running barefoot and suggested that factors such as running surface, shoe choice, speed, and individual running styles play too large a role to make such generalizations possible. The investigators also saw no difference between shod and barefoot movements in the ability to strengthen certain muscles and concluded that differences in overall performance were likely due to runners” individual athletic ability and style – including the combination of footwear and pattern of how their feet strike the ground when running.

As for barefoot running conforming with our evolutionary past, it’s important to remember that our barefoot ancestors weren’t logging their miles on pavement. It could be argued that having the cushioned sole of  modern running shoe between your foot and asphalt or concrete surfaces replicates the primal experience of running on soft earth better than barefoot running does.

If you’re considering barefoot running, keep in mind that getting rid of shoes requires a change in running style that doesn’t happen automatically. It demands a shorter stride than most runners are accustomed to, for instance, and making that change may not be easy. A Harvard University website on this subject recommends a slow transition to avoid injury.

Another issue is where you run and the likelihood of encountering glass, stones and other debris. If road surface safety is not an issue and barefoot running appeals to you, there’s no reason not to try it. But don’t count on it to prevent injuries.