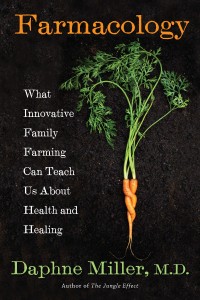 I had been writing and lecturing about food and health for over a decade before it dawned on me that the people who grow our food might have a lot to teach me about health and healing. In order to pursue this idea, I took time away from my medical practice and visited seven sustainable farms. As I journeyed across the country, milking cows, gathering eggs, weeding brassicas and laying irrigation, I discovered that good medicine and good farming had much in common. In fact, I began to see family farmers as healers whose jobs were more complicated than mine, since they were responsible for the health of an entire eco-system (soil, soil creatures, animals, plants, water, air, people, and so on) while I was expected to care for just one member of that eco-system (people).

The more I learned about the science of farming, the more I recognized its connections to medicine. For example, did you know that our gut physiology actually mirrors what happens in the soil? The intricate nutrient exchange between soil, microbe and plant is like the dance that takes place in our intestine, involving the mucosal lining, resident microbes and food (plants and animals). The biochemical makeup of soil also roughly matches ours, with a similar nitrogen-to-carbon ratio and the same range for normal pH (6.0 to 7.5). Finally, I realized that carbon, nitrogen and every other mineral and vitamin building block in our body is derived from soil (via our food). In other words, we are not simply nourished by the soil, we are of the soil!

My internship with at Jubilee Biodynamic Farm in Washington State offered me some of my first insights into this agriculture-medicine connection. The farm’s owner, Erick Haakenson, told me that when he first bought Jubilee, the soil was over-farmed and depleted of nutrients. To fix this, he started sending soil samples to a lab and replacing missing minerals according to the lab reports – something which is standard practice in agriculture. But after a couple of years, several tons of additives, and many thousands of dollars, Erick was still not satisfied with the health of his soil or the quality of his produce and he wondered if the soil additives were getting to the plant. He also began to consider the unintended consequences of spreading foreign additives: for example, were they “locking up” existing soil nutrients – ones that were essential for healthy plant growth? He decided to look for an alternative, holistic, and cheaper way to improve his soil and boost the health of his farm.

After reading books written by organic agriculture pioneers, Erick realized that in order to really nurture his farm, he needed to imitate nature’s full-cycle way of “farming” – in other words, to model how plants grow in wild spaces. This included recycling all waste back into the soil, conserving water, avoiding outside additives such as pesticides and fertilizer and farming with animals. In the end, this would nourish the farm’s vital force: the billions of soil organisms that lie just below the soil’s surface. These creatures amend and aerate the soil. They also harvest nutrients from the humus, the soil’s rich top layer, and pass these vitamins and minerals onto the plant roots in perfectly packaged doses.

Several seasons after changing his practices, Erick’s farm began to thrive and his soil tests were better than when he was using outside additives. Hearing this story, I realized that it is not uncommon for doctors (including me) to use “test and replace” strategies to solve our patients’ health problems. When we feel something is off, one of the first steps is to order a lab and then prescribe vitamins, minerals, and medications in an attempt to correct any number that lies outside the norm. Our tendency is to think of the human body as a test tube, and add things into this complicated system with the belief that the pill or potion will find its proper home. Of course, supplements and drugs do sometimes have a role in making us healthier, but their overuse and misuse can create the same unintended reactions as additives in Erick’s soil. (Excess calcium can “lock up” zinc and iron in humans and excess phosphorus does the same in soil.) Given our close connections to soil, I began to wonder whether Erick’s approach to rejuvenation might offer me a new way to rejuvenate my patients.

What I discovered is that eating from an eco-farm such as Erick’s could offer us surprising health advantages. It is true that recent studies (such as a highly publicized one from Stanford) suggest that there is no nutritional advantage to eating certified organic food as compared to food that is conventionally grown. But this might be the wrong comparison. Some organic farms (especially big organic operations) take poor care of their soil, whereas other farms (including some that are not certified organic such as Erick’s) have a healthy, microbially active soil. Studies show that this kind of rich soil definitely produces more nutrient-rich food. Furthermore, cutting-edge microbiology research is showing that microbes in soil (or parts of their DNA) hitchhike on our food and transfer health information to the resident microbes in our gut. If that soil is healthy then, in turn, this information can help build our immunity and support our metabolism. By contrast, if the soil is unhealthy, this information could be a source of antibiotic resistance and even promote chronic disease.

Daphne Miller, M.D., a graduate of the Fellowship program of the Arizona Center for Integrative Medicine, is a practicing physician, author and professor of family medicine at the University of California, San Francisco. For other “farm to body” lessons on cultivating health and vitality, see Dr. Miller’s book, “Farmacology; What Innovative Family Farming Can Teach Us About Health and Healing.“