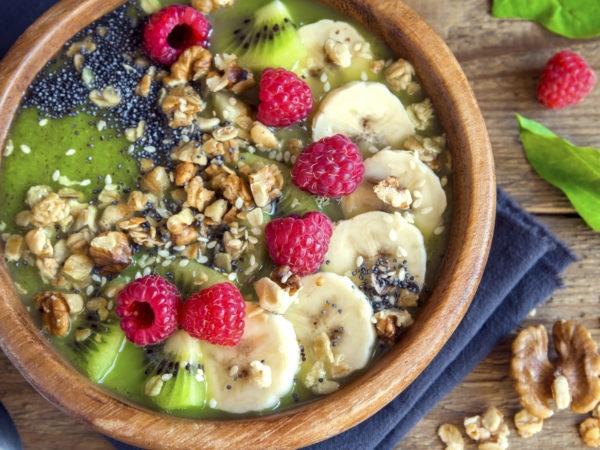 All-fruit diets have been around for a long time – there is some evidence, based on his writings, that Leonardo da Vinci was a fruitarian. This very restrictive way of eating made news in January 2013, when actor Ashton Kutcher revealed that he was hospitalized for two days after a month on a fruitarian diet while preparing for a movie in which he was to play computer visionary Steve Jobs. It is well known that Jobs began experimenting with extreme diets as a teenager and spent much of his adult life on various vegan regimes, including fruit-only. In fact, according Walter Isaacson’s biography, the name “Apple” came to Jobs during a fruitarian phase after a visit to an apple farm.

Fruitarians eat nothing but fresh, raw fruits, seeds and nuts. Avocados and tomatoes are included; although we think of them as vegetables, they are fruits in the botanical sense because they contain seeds. Some fruitarians eat only one type of fruit at a time, waiting for a short period of time before eating another type. The Fruitarian Foundation recommends waiting at least 90 minutes. You’re supposed to eat only when hungry, then consume as much as you want until you’re full. Because fruitarians believe that their way of eating provides all the water they need, they drink water only when and if they cheat on their diet and eat something other than fruit.

People often become fruitarians for the same reason that many individuals become vegetarians or vegans –opposition to killing for food. Beyond that, many seek health benefits. A statement on the Fruitarian Foundation’s website claims that the diet and lifestyle are “calculated to allow the human to produce healthy offspring, live to be more than 100 years of age, be free of all disease, and only ‘mature’ while not aging, as most people think of it, and die a natural death in their sleep.”

Very little research exists on the fruitarian diet. I could find only two references to it in a search of medical literature. I know of no reasons to believe that following this diet will keep you disease free for life and enable you to live more than 100 years. I can tell you, however, that the diet is much too high in sugar, and provides you too little protein. (The only protein sources are avocados and nuts, but they’re unlikely to meet your needs.) You will also be shortchanged on vitamin B12, calcium, iron, zinc, omega-3 and omega-6 fatty acids. Fortunately, fruitarianism is so restrictive that few people can stick with it for very long.

I like good quality, ripe fruit in season. My anti-inflammatory diet includes three or four servings of fruit per day. But decisions to adopt an all-fruit diet are based on emotion rather than reason, and likely to do more harm than good.