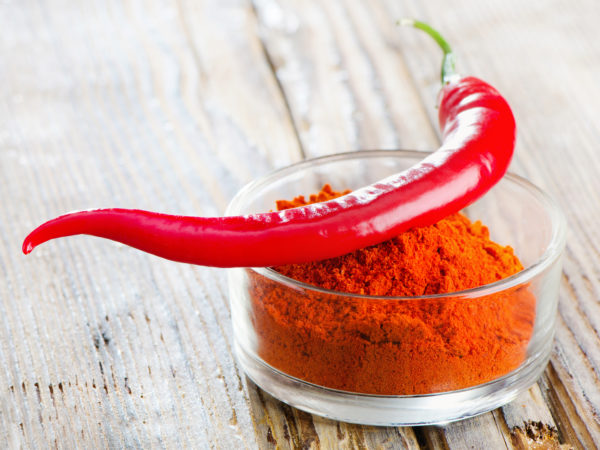 If you’re looking to shed a few extra pounds, I wouldn’t count on red pepper alone, but some new research has confirmed earlier findings that capsaicin, the compound responsible for the “heat” in hot peppers, may help with appetite control and increase rate at which the body burns calories.

A study of capsaicin from Purdue University focused on amounts an average individual could reasonably include in a daily diet – about half a teaspoon (one gram) of dried, ground red pepper. For this small study, researchers recruited 25 subjects, none of whom were overweight. Of the group, 13 participants reported they liked spicy food and 12 did not. Those who didn’t like it were given 0.3 grams of red pepper to sprinkle on their food, while those who did received 1.8 grams. The researchers found that, in general, consuming the red pepper increased core body temperature and enabled the study participants to burn more calories.

The investigators also found that the participants who didn’t like or consume spicy food regularly before the study reported decreased appetite, particularly for fatty, salty and sweet foods. Those who liked red pepper prior to the study didn’t report the same appetite changes. The researchers suggested that when people consume hot red pepper regularly, it may lose its effect. Further study is needed to determine how long the effect on appetite and calorie burning lasts and what dietary changes might enhance it.

Previous investigations have used red pepper in capsule form, not sprinkled on food, which may be why they didn’t document the effects seen in the Purdue study. The taste and total sensory effect of the spice may maximize its impact on body temperature, calorie burning and appetite.

The researchers cautioned that adding red pepper to your food isn’t a big enough change to prompt weight loss but said that it may be helpful if combined with exercise and healthy eating. And, of course, this study suggests red pepper’s possible weight loss benefits are more likely if you start out not liking it.