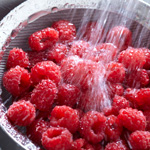 Raspberry ketones are compounds that give raspberries their characteristic scent. They’re used in the U.S. as food flavorings and are also sold here and in Japan as weight-loss supplements. Raspberry ketones are chemically similar to capsaicin, the compound that makes hot peppers hot and is believed to help burn fat. I have heard that the demand for them has been overwhelming since they were favorably mentioned on Dr. Mehmet Oz’s television program in February 2012.

I’ve seen only two studies to back up the claims that raspberry ketones can promote weight loss, and both studies were on animals. One, in which mice were fed a high-fat diet and given raspberry ketones, suggests that the compounds improved insulin sensitivity and reduced fat in the liver by breaking up fat cells. And a study from Korea found that they boosted secretion by fat cells of the hormone adiponectin, which regulates the processing of sugar and fats.

Those studies may demonstrate that raspberry ketones promote weight loss in mice, but we have no evidence to suggest that the supplements are safe and effective in humans. Dr. Oz showed some before-and-after photographs of women who claimed to have lost weight by taking raspberry ketone supplements, but he explained that all of the women had also cut calories and exercised.

The dose of raspberry ketones recommended for weight loss is 100 to 300 mg/day, equivalent to what worked in laboratory mice. The cost of those capsules reportedly ranges from $20 to $60 per month depending on the dose you take. In my view, any price is too high for products that haven’t been shown to work. One of the newest raspberry ketone products seems even more far-fetched than the supplements – a "diet body lotion" to be applied to the skin to "burn fat" without taking pills. I’ve seen no studies showing that rubbing a "diet" raspberry ketone lotion into the skin is effective. However, researchers in Japan reported in 2008 that putting raspberry ketone lotion on the scalp grew hair on half of a group 10 people with alopecia (hair loss) and that when applied to the face it improved skin elasticity in the cheeks of five women. The results of that very small study have not yet been replicated.

The ongoing promotion of raspberry ketones is similar to past enthusiasm for various other so-called "miracle" supplements said to promote weight loss. Unfortunately, there is yet no magic pill that will melt away the pounds. Losing weight is hard work that succeeds only when you consistently cut calories from your diet and burn some in regular exercise.