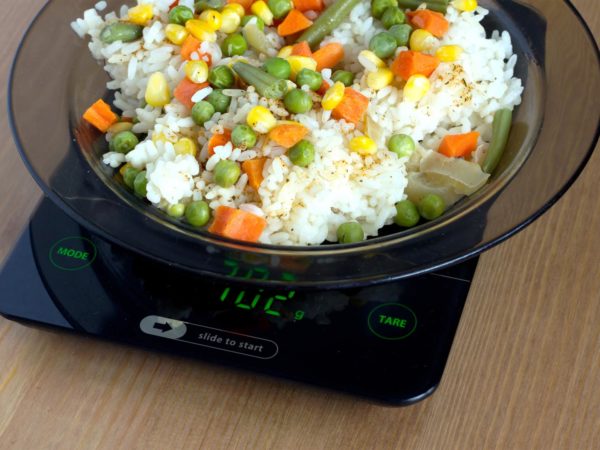 Large portions – the “supersize” factor – play a central role in the obesity epidemic, and you may be surprised at how many calories you can cut if you just manage to avoid those giant servings. An analysis from the UK’s University of Cambridge published this year (2015) found that avoiding larger-size portions could reduce average daily calorie consumption by 16 percent (or 279 calories) among adults in the UK and by 29 percent (527 calories) among adults in the U.S. The British researchers reviewed 61 studies that included data on 6,711 participants and found that the effect of trimming portion sizes didn’t vary much between men or women, by people’s body mass, their susceptibility to hunger or tendency to consciously control their eating behavior. They noted that the incentive to buy (and then eat or drink) large-size portions is that they offer better value for the money.

A 2006 study from Penn State showed how easily people fall into the habit of consuming oversized portions. Researchers gave 32 volunteers standard-size servings and monitored the amounts they ate. At a second meal, they gave them portions that were 50 percent larger. The participants consistently ate more when they were served more – except for vegetables.

A study group from Brown University looked at how the size of snack food packages influences how much people eat. They provided chips, candy, cookies and crackers to 28 healthy college students. Some students received big boxes containing a total of 4,350 calories; a second group was given the same amount of calories and the same amount of food divided into four small boxes. Two other groups were provided small or large boxes of snacks that added up to 8,750 calories. Everyone was told to eat as much as they wanted, not to eat any other snacks, and to return the leftovers three days later. The students who took home the 4,350 calories ate 60 percent of the snacks, regardless of packaging; those who were given the 8,750 calories ate 81 percent more calories.

There are some tricks that may help you trim your portions. Cornell University food science researcher Brian Wansink has found that people served themselves 18 percent more pasta with marinara sauce when they were given red plates rather than white plates. The same investigation showed participants dished up 18 percent more pasta Alfredo onto white plates. He also reported that downsizing from 11-inch to 10-inch plates results in serving yourself less food, because the smaller plates make a normal servings look more satisfying.

At many restaurants, you can cut calories by splitting meals with friends or taking half home. The only food group you don’t have to worry about over-consuming is vegetables, provided they aren’t drenched in oil or butter. At home, weigh and measure your food objectively until you feel comfortable judging normal portion sizes by sight alone.