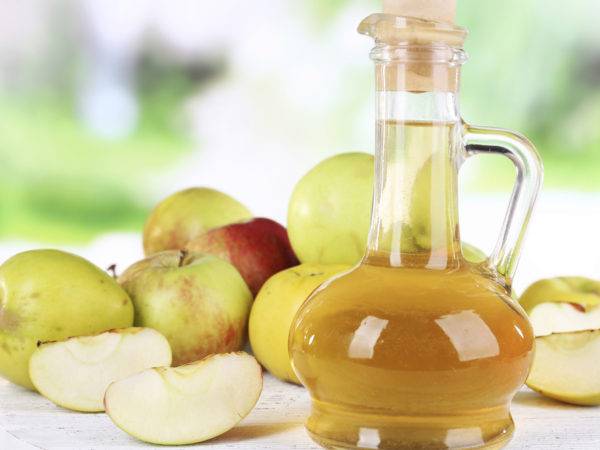 The only research I’ve seen suggesting that vinegar may help reduce fat was a study published in the July 8, 2009, issue of the Journal of Agricultural and Food Chemistry. Japanese researchersreported that they had put laboratory mice on a high-fat diet and fed them acetic acid, the main component of vinegar. Another group of mice on the same high-fat diet received water, not acetic acid. Both groups of mice gained weight but those on the vinegar “diet” put on up to 10 percent less body fat than the others. The researchers said that the acetic acid may turn on genes for fatty acid oxidation enzymes. Theoretically, this would result in the production of proteins that can break down fats and therefore suppress body fat accumulation. Additional research will be needed to confirm these results and determine if acetic acid can help humans slow weight gain.

As far as the apple cider vinegar diet is concerned, there is absolutely no scientific evidence showing that apple cider vinegar for weight loss is effective or that it contains any magic ingredients that help you to shed pounds. Back in the 1970s when this diet took its place among the many weight loss fads and scams, proponents claimed that somehow a combination of apple cider, kelp, vitamin B-6, and lecithin fooled the body’s metabolism into burning fat faster than it would normally.

These days the claims are a bit less grandiose – supposedly, all you need to do to lose weight is to take one, two, or three teaspoons of apple cider vinegar before every meal, starting with one teaspoon and then working up to two or three. The only advice you get with this “diet” is to eat moderate portions at meals, avoid snacking, and wait for the apple cider vinegar to reduce your hunger and food cravings. It won’t do that, but like any acid, it can slow gastric emptying, blunting the effect of high-carb meals on blood sugar.

In addition to weight loss, apple cider vinegar has been promoted for relief of arthritic stiffness, and as a treatment for sore throats, acne and other skin problems, high blood pressure, headaches, dandruff, sunburn, and elevated cholesterol levels. Again, I have seen no good evidence that apple cider vinegar weight loss claims are true.

Weight loss requires effort and commitment. The only formula you can depend on is learning and applying the principles of healthy eating and getting enough physical activity.