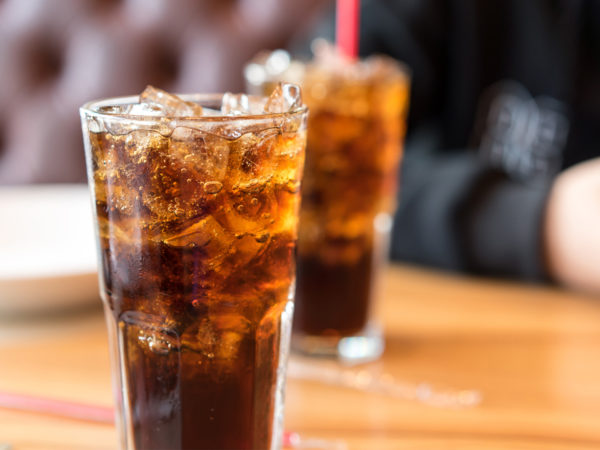 If you want to lose weight, drinking diet soda probably won’t help. Diet sodas have never been proven to help anyone lose unwanted pounds. In fact, research from the Johns Hopkins Bloomberg School of Public Health has shown that overweight and obese people who drink diet sodas unwittingly make up for the “no-cal” nature of these beverages by ingesting more calories from food than their peers who consume sugar-sweetened drinks.

The research team came to these conclusions after examining data from the 1999 to 2010 National Health and Nutrition Examination Survey (NHANES), a population-based survey designed to collect information on the health and nutritional status of the U.S. population. They focused on national patterns in diet beverage consumption and caloric intake by obese and overweight adults. We know that consumption of diet beverages has soared (along with the obesity epidemic) since 1965. At that time, only three percent of the population drank diet sodas compared to 20 percent of the population today. The Hopkins research showed that people who drink diet sodas typically have a higher body mass index (BMI) and consume more snack food than adults who drink “regular” sugar-sweetened beverages.

The investigators noted that earlier research suggests that this difference stems from the effects of the artificial sweeteners used in diet drinks. These substances are associated with a greater activation of reward centers in the brain, the Hopkins researchers wrote. But since they are calorie-free, the sweeteners don’t give the same actual “reward” as sugary drinks, a difference that disrupts appetite control. Essentially, when the brain gets a message that sweet calories are coming and they don’t arrive, the void can set you up for cravings that ultimately lead to consuming more calories.

The Hopkins study isn’t the first to link diet sodas to weight gain. In 2011, epidemiologists at the University of Texas Health Science Center at San Antonio reported a 70 percent greater increase in waist circumference among participants enrolled in a study of aging who drank diet soda compared to those who didn’t. Those who reported drinking two or more diet sodas daily had increases in waist circumference that were five times greater than those who didn’t drink diet soda. What we don’t know is whether the people in this study thought that drinking diet sodas gave them a “free pass” to eat whatever they wanted without regard to calorie content.

Bottom line: I have long advised people to stay away from non-nutritive sweeteners for various reasons, and I do not believe they are an effective strategy for losing weight. In fact, evidence is accumulating that they likely make it harder to do so.