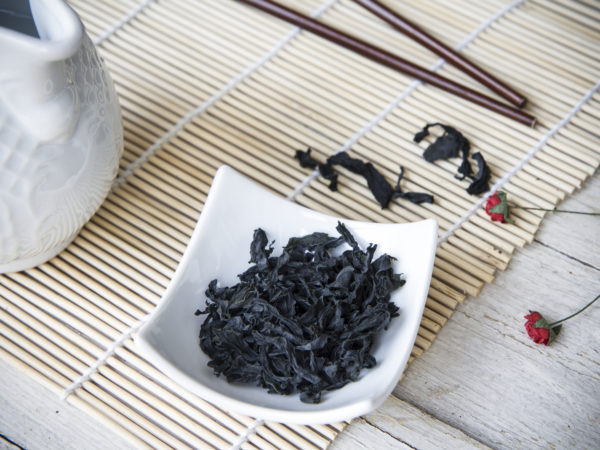 You may be referring to wakame, a type of brown seaweed or kelp used to flavor Asian soups and salads. Japanese chemists have found that a component of wakame, a brownish pigment called fucoxanthin, promotes weight loss, but so far, they’ve only studied its effects on obese rats, so we don’t know yet if it will work in humans. If it does, the researchers, from Japan’s Hokkaido University, said fucoxanthin could be developed into new types of medication to combat obesity.

Here’s what we know so far about fucoxanthin and its weight loss effects: it is found principally in brown seaweed (there are much smaller amounts in red and green seaweed). In the rat study, fucoxanthin appeared to stimulate production of UCP1, a protein that increases the burning of fat. This protein is found in the visceral fat that surrounds internal organs in the abdomen – the type of fat linked to heart disease, diabetes and metabolic syndrome.

For the rat study, described at the September, 2006, national meeting of the American Chemical Society, the researchers isolated fucoxanthin from wakame and added it to the animals’ regular food. As a result, obese rats lost five to 10 percent of their body weight. The fucoxanthin also appeared to stimulate the liver to produce DHA (an omega-3 fatty acid) at levels usually seen with fish oil supplements. DHA can reduce LDL (“bad”) cholesterol and improve triglyceride levels; it’s also a major component of brain tissue.

Next on the agenda are studies to see if fucoxanthin works as well in humans as in rats. In the meantime, don’t think you can lose weight by eating lots of seaweed. You would have to eat enormous amounts of wakame before you would get enough fucoxanthin to see even the slightest effect on weight, because the substance is bound tightly to proteins in the seaweed and is not easily absorbed in the form of whole seaweed.