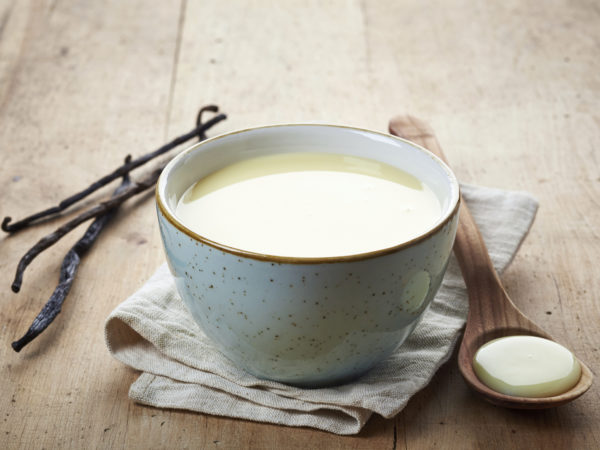 Vanilla is derived from the orchids of the flat-leaved vanilla plant (V. planifolia), a perennial herbaceous climbing vine belonging to the family of Orchidaceae. Vanilla originated on the east coast of Mexico, eventually making its way to Madagascar. This island nation off Africa’s southeastern coast is now produces most of the world’s vanilla.

The word vanilla is derived from the Spanish word, “vaina,” which means “sheath or pod” – a nod to the bean’s appearance. Challenging to grow, it’s an expensive spice, second only to saffron. This is one reason why many vanilla-flavored foods contain only vanillin, an inexpensive synthetic flavoring. Vanillin copies the bean’s principal flavor and aroma compound, while lacking the natural version’s deep, complex notes.

As a culinary spice, vanilla is prized for its unique smell and taste, making it a staple in baking. Its scent also offers a variety of opportunities to use it in perfume manufacturing and aromatherapy.

The health benefits of vanilla are limited, and clinical studies to evaluate its effectiveness are lacking. However it is still used around the world to treat a variety of conditions: it has been added to different foods to help patients with compromised immune systems. Traditionally, vanilla has been used as a treatment for fever; as an aphrodisiac; and as both a sedative and a stimulant. An Ayurvedic medical remedy uses locally applied vanilla extract to relieve tooth pain.

Nutritionally, vanilla is a good source of manganese, copper and riboflavin or vitamin B2.

As a culinary spice, there are three main preparations: the whole pod, a liquid extract, and powder (more common in Europe than North America). To use vanilla pods or beans in cooking, simply split a pod lengthwise and scrape out the seeds.

Vanilla beans and vanilla powder will last up to two years when stored in a tightly sealed glass container away from light and heat. Revive dried-out beans by submerging them in hot water for a few minutes. Vanilla extract, tightly sealed, can last indefinitely.

Add vanilla to foods and beverages to help reduce the amount of sugar needed for sweetening, especially in baked goods and desserts. Vanilla can also be added to butters and spreads or used to flavor savory dishes, like lobster.

Dr. Weil’s take:
I’ve never liked the term “plain vanilla,” which is used to describe things that are bland or commonplace. Dishes flavored with high-quality, natural vanilla are anything but plain, and a wide range of foods profits from a dash or sprinkle of fresh vanilla! The beans are available in specialty cooking shops. Try to select fresh, moist, plump beans and use them as soon as possible. Although scraping the pods can be slightly messy, their bright, distinctive taste will convince you that the effort is worthwhile.

Another way to use vanilla beans is to thoroughly dry the pods and then grind with a mortar and pestle. Use the freshly ground powder in every thing from drinks to yogurt to baked goods.

Try vanilla in these recipes: