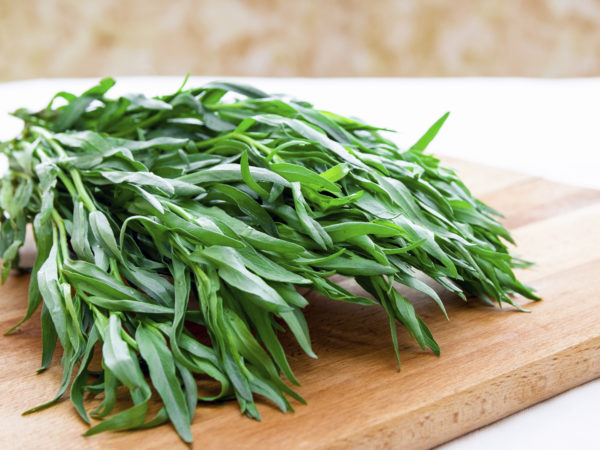 Tarragon (Artemisia dracunculus) is a perennial herb from the Asteraceae family. It is known for its aromatic, culinary and medicinal uses. There are different varieties, but the best known are French tarragon, which is preferred by many for culinary use; Russian tarragon, which is not as flavorful, has a bitter edge, and is hardier (it is also used in craft making); Spanish tarragon which is similar in flavor to the French variety, but with a stronger hint of anise; and so-called “wild tarragon” which is cultivated and widely available worldwide.

Native to regions in the northern hemisphere, tarragon is a slender plant with lance-shaped, shiny green leaves. The history of tarragon includes mentions in medieval writings as a medicinal agent, and ancient Greeks may have chewed tarragon leaves to address toothaches. In modern times, as a medicinal herb tarragon has been used orally to address digestive disorders, hiccups, toothaches, as an appetite stimulant, and as a diuretic. Herbalists recommend it for its “cooling” properties and as a way to address menopausal hot flashes. It is considered a traditional remedy in France for insomnia, learning disorders and hyperactivity.

As an aromatic, tarragon is added to fragrances, soaps and cosmetics.

For culinary use, tarragon is used to flavor foods and beverages. The flavor it imparts varies, but can be generally described as having hints of licorice, pine, mint and pepper. It is popular in France, where it is considered a fine herb in French cooking, and is the main flavoring component in Béarnaise sauce. In Armenia, Georgia and Russia, tarragon is added as a flavoring agent to carbonated soft drinks that are popular there.

Dr. Weil’s take on tarragon:
When using tarragon, fresh is best – it imparts more flavor. Look for sprigs with bright green leaves, wrap in a loose, damp paper towel and place in a plastic bag in the refrigerator; it should last for several days. Dried tarragon can be stored away from light and heat in a tightly sealed container for up to six months.

You can use fresh tarragon leaves as a garnish or in salads; to enhance the flavor of meats, vegetables and cheeses; and added to vinegar, mayonnaise or butter to enhance the flavor. It can also be used in tea and pastries for a taste that is similar to that of anise. When cooking with tarragon, add it at the last minute so the flavor does not become bitter.

Tarragon is an easy plant to grow, even for inexperienced gardeners. Tarragon aficionados claim that this hardy plant tastes even better when grown in adverse conditions such as poor soil or extremes of cold or heat.