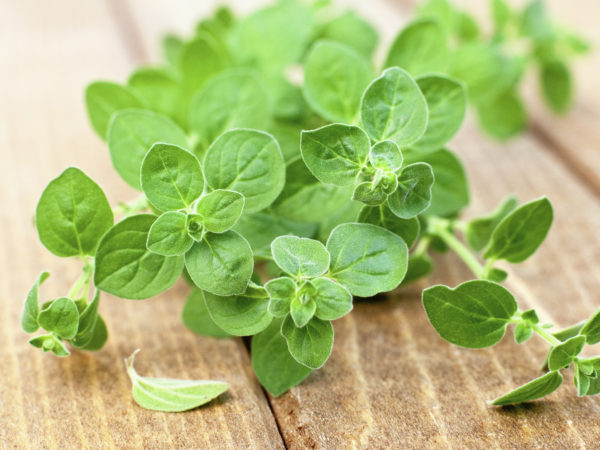 The word oregano comes from the Greek words for mountain – “oros” – and joy – “ganos.” The plant has multi-branched stems with small gray-green, oval leaves and small pink or white flowers. Also known as a wild marjoram, it is native to northern Europe, but now thrives throughout the world. Its savory fragrance and taste have made it a staple of cooking in the Mediterranean region, where it grows perennially. Cultivated in France since the Middle Ages, it became popular in the U.S. only recently. American GIs returning from Europe brought with them a taste for the herb in pizza, pasta and other culinary delights they had discovered in Italy and the Mediterranean coast.

The health benefits of oregano include its antibacterial and antioxidant properties: oregano has been used orally to treat respiratory tract infections, gastrointestinal disorders, urinary tract infections, headaches and cardiovascular concerns. One study found that components of oregano may have protective effects against the oxidation of low-density lipoproteins (LDL), perhaps due to their high content of polyphenols.

The volatile oils from this herb have also been used to treat allergies and sinusitis, earaches, cold and flu, and intestinal parasites. Topically, oil of oregano has been used as an antibacterial to treat fungal infections, dandruff, acne, and mouth concerns like canker sores, toothaches and gingivitis. It can also be used to repel and treat insect bites and stings, as well as for steam inhalation therapy.

Pregnant women should not take supplements of oregano due to its potential to raise the risk of spontaneous abortion.

Oregano contains several phytonutrients – among them thymol and rosmarinic acid – that have potent antioxidant activity. It is an excellent source of vitamin K along with vitamin E, manganese, iron, and calcium. Taken regularly in larger quantities – such as in salads – oregano can also be a good source of fiber.

The flavor of fresh oregano is always better than dried versions. When choosing the fresh herb, look for leaves that are a bright green color with firm stems. Store it in the refrigerator wrapped in a damp paper towel for up to four days. You can also freeze it, whole or chopped, in ice cube trays covered in water. Dried oregano kept in a tightly sealed glass container away from light and heat should last up to six months.

When it comes to flavoring a dish, oregano works well with savory foods – go above and beyond adding it to pizza and pasta sauces and try it on fresh vegetables, cooked onions or mushrooms, in salad dressings or on an omelet. Remember not to add oregano – fresh or dried – until the end of the cooking process to preserve its flavor.

Dr. Weil’s take:
I grow oregano in my Tucson garden where it does very well in well-drained soil and strong morning sun. Oregano can also be cultivated in pots if you’re short on space.

In addition to the many well-documented uses for the leaves, the small pale purple or white blooms of the Greek oregano variety can be flavorful additions to spring salads. I’ll also brew oregano tea to settle an upset stomach and calm the nerves.

I find oregano to be a perfect complement to a big pot of homemade beans. Add a few leaves to the pot during the last 15 minutes of cooking to impart a rich, earthy flavor. You can also substitute oregano for a robust twist on the more familiar basil pesto.

Try these recipes with oregano: