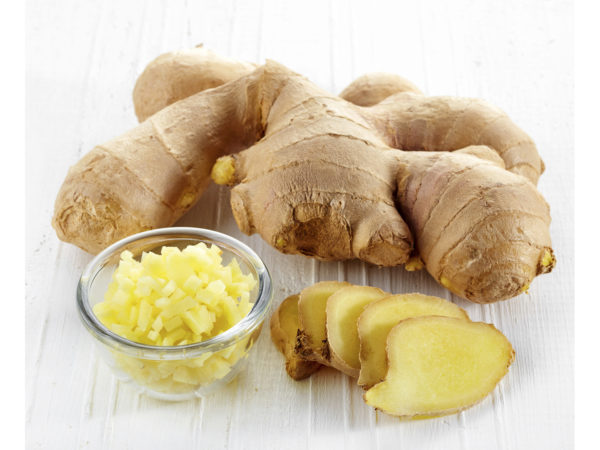 Ginger (Zingiber officinale) is a zesty spice native to southeastern Asia. The ginger root familiar to most people is the underground rhizome of the ginger plant. Its name is thought to come from the Sanskrit name singabera, meaning “horn-shaped,” probably a reference to the fact that ginger root sometimes resembles a horn.

This aromatic and pungent root has been around for millennia. It was mentioned in ancient Indian, Chinese and Middle Eastern writings, and was such a prized spice that ancient Romans imported it from China, despite its prohibitive cost. Today ginger is cultivated in Jamaica, Fiji, India, Australia and Indonesia.

One reason ginger has been so valued throughout history is its wide array of medicinal applications. Ginger has been celebrated for its ability to soothe gastrointestinal distress, reducing gas, cramping and especially nausea. It is so effective in treating nausea that double-blind studies have shown it to be better than over-the-counter medicines designed to alleviate motion sickness. It is a great choice for pregnant women as a safe, natural agent for even the most severe forms of nausea and vomiting.

Ginger can be made into a tea simply by steeping one or two half-inch slices of fresh root in a large cup of hot water for three-to-five minutes before drinking.

Ginger is a potent anti-inflammatory, containing gingerols – active phytonutrients that not only impart its distinctive flavor, but help lower the inflammatory response. Ginger has been shown in studies to be effective at alleviating pain and improving mobility in people with rheumatoid arthritis and osteoarthritis.

Gingerols may also help to inhibit the growth of colorectal cancer cells and induce the death of ovarian cancer cells in humans. It may also help with recovery from colds and flus by promoting healthy sweating and detoxification, although more research is needed to establish these actions.

Ginger is often associated with Asian cooking, and commonly used in stir-fries, but its spicy, zesty taste is also delicious in beverages, baked goods, marinades and on fruit and vegetables. For culinary use, ginger can be used dried or fresh, though the fresh root has much more flavor and taste than dried ginger, and contains higher levels of gingerols. When purchasing fresh ginger, look for roots that are firm, smooth and free of mold.

Typically, supermarkets carry what is called mature ginger – it has a thicker skin that requires peeling. Asian markets generally offer young ginger as well, which does not need to be peeled. Either type is available year-round, and will last in the refrigerator unpeeled for up to three weeks. You can also freeze unpeeled ginger for up to six months.

To use mature ginger, simply cut off the skin with a paring knife and slice, mince or julienne the root by cutting it into long, thin strips. You can add ginger when cooking at the beginning for a milder taste, or at the end for a more pungent flavor.

Dried ginger powder can be kept in a tightly sealed jar in the refrigerator for up to a year.

Dr. Weil’s take:
Ginger is another of my kitchen basics. When using fresh ginger, I often divide the amount in half – adding the first half at the beginning of cooking and the rest at the very end. This helps to impart the many distinctive flavors of ginger to the dish, resulting in a complex and tasty outcome. The high heat of stir-frying is particularly useful in bringing out the unique, pungent and lively taste of ginger. And grated ginger complements fresh citrus juices perfectly. Try some grated into juice or lemonade on a hot summer day!

Watch Dr. Weil discuss the health benefits of ginger in his healthy kitchen.