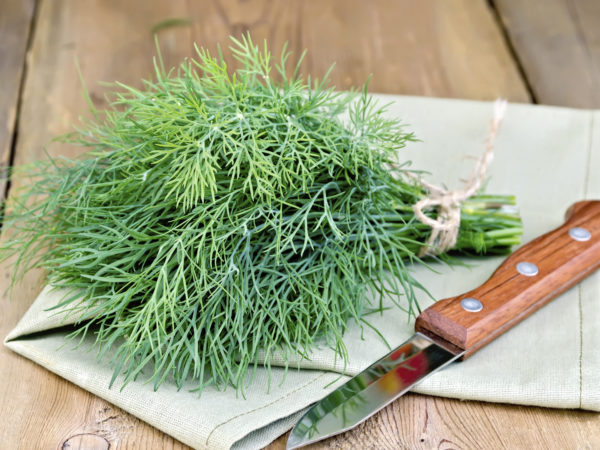 Dill (Anethum graveolens) is a perennial herbaceous plant used primarily for flavoring foods, but it also has medicinal applications. Native to southern Russia, western Africa and the Mediterranean, dill is part of the Umbelliferae family (which includes parsley, cumin and bay leaf). The word “dill” comes from Norse roots meaning “to lull,” a reference perhaps to dill’s medicinal applications for insomnia and digestive upset. Even though it did not originate there, culinary use of dill is now often associated with Scandinavian cuisine.

Medicinally, both the delicate leaves – sometimes called dill weed – and dill seed have been used as healing agents since ancient Greek and Roman times. Dill leaves are antibacterial, and have been used to help clean the mouth and promote wound healing, as well as for treating upset stomach and insomnia. Today, dill can be used orally to treat health concerns ranging from loss of appetite to fever, colds and coughs. You can even chew raw dill seeds to combat bad breath.

The scientific research on the use and the health benefits of dill is limited: one animal study demonstrated a dose-dependent cholesterol-lowering effect, and although results were not found to be significant, a human clinical trial did find a mild reduction in both total and low-density lipoprotein (LDL) cholesterol. However, this same clinical study, suggested that dill might also mildly raise triglycerides. Women who are pregnant should avoid dill in quantities that exceed common culinary amounts, as dill seed has been used to stimulate menstrual flow.

Nutritionally, dill is a good source of nutrients and vitamins including calcium, fiber, iron and manganese.

When buying dill, fresh is best – the aroma and fragrance of the fresh leaves trumps that of dried dill. Look for leaves that are green and feathery. Fresh dill does not keep for more than a couple of days, and should be stored in the refrigerator – you can place the stems in a container of water, or wrap the leaves loosely in a damp paper towel. You can freeze fresh dill in airtight containers, or chop and put into ice cube trays with water. Dried dill lasts about six months when properly stored in sealed glass containers – keep in a cool, dark place.

Regardless of whether you choose fresh or dried, opt for dill that is organically grown when possible. Dill is also easy to grow indoors and out, and is a good addition to an herb garden for its versatility and flavor.

Dr. Weil’s take:
Neither dill seed nor dill weed are commonly available as supplements, so I recommend the frequent use of either form in culinary applications to take advantage of dill’s unique, healthy complexes of antioxidant and anticarcinogenic compounds.

For culinary use, the dill plant’s leaves and seeds can be used. The soft leaves of the dill plant offer a sweet, lighter taste, while the seeds are more aromatic and bitter. Dill – fresh or dried – can be used in salad dressings, breads, soups and dips. It lends a pleasing and unique flavor when used in sauces over fish and when added to steamed vegetables (you can even use the dill stems in water when boiling potatoes). Fresh dill seeds and leaves are also a main component in pickled vegetables. You can use dill as you would salt or pepper, and add it to everything from cottage cheese to baked potatoes.

Try dill in these recipes: