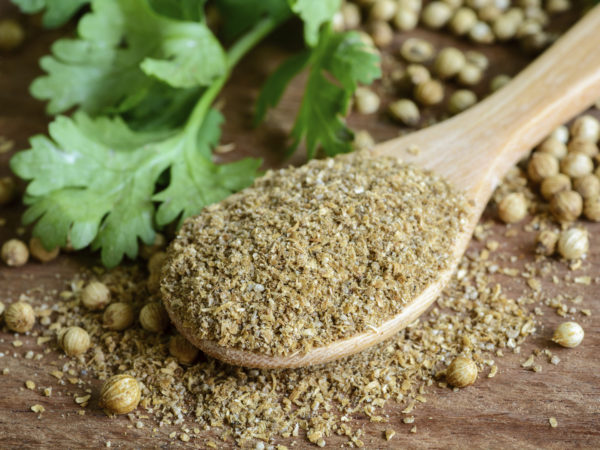 The name coriander comes from the Greek word “koris” which means “bedbug.” This probably comes from unripe coriander’s offensive smell, which is similar to that of bedbugs. When ripe, the seeds and leaves of coriander have a pleasant fragrance with notes of both sage and citrus peel. Today, production principally comes from India, the Russian Federation, Morocco and The Netherlands.

Cilantro is perhaps the most divisive herb in the spice rack – while many people enjoy it on a variety of dishes, some find its taste highly offensive, variously describing it as “metallic” and “soapy.” It turns out that the positive or negative reactions to cilantro’s taste may be genetic: a survey of 30,000 people led to the discovery of specific gene variants linked to a dislike of cilantro.

As a medicinal spice, one of the most important health benefits of coriander is its anti-inflammatory properties as well as its cholesterol-lowering and blood-sugar-lowering effects – all confirmed by animal studies. The volatile oils of the coriander plant are rich in phytonutrients, flavonoids, and anti-microbial compounds: a study published in the June 2004 issue of the Journal of Agriculture and Food Chemistry found that an anti-bacterial compound in coriander called dodecenal may be effective against salmonella. Coriander has also been used around the world to treat a variety of health concerns including digestive disorders, heatstroke, anxiety and insomnia.

Fresh cilantro should appear similar to flat-leaf parsley. Look for a bright green color and a firm, crisp feel. It is delicate and highly perishable, and should be stored in the refrigerator with the roots still attached. Place the roots in a dish and cover the leaves with a loose plastic bag; it can last up to a week. You can also wrap root-free cilantro in a damp cloth and place in a plastic bag; it will last up to three days in the refrigerator. Freeze chopped cilantro in airtight containers or ice cube trays filled with water. Do not wash fresh cilantro until just before use; then give it three washings to remove all dirt and sand.

When ripe, coriander seeds are a yellowish-brown and have longitudinal ridges; they are available in whole or powder form. Whole seeds keep their flavor better. They can easily be ground with a mortar and pestle when needed.  Seeds and powder should be stored in a tightly sealed glass container away from heat and light. Ground coriander will last up to six months, and whole seeds will stay fresh for about a year. Before grinding the seeds, soak in cold water for about ten minutes to help revive essential oils.

Cilantro can be used like parsley to top an array of foods, from Mexican dishes and salsas to fish and soups. It is also prominently featured in Portuguese and Thai cuisine. Coriander seeds can be added to soups and stews, vegetables, and in poaching liquids. The culinary and health benefits of cilantro make it an exceptional herb to keep in your kitchen.

I am not a confirmed cilantro hater; in fact, cilantro is among my favorite herbs and always has a place both in my garden and refrigerator. For a simple salad dressing or vegetable dip, chop garden-fresh cilantro and mix into plain yogurt with a dash of salt and pepper. Cilantro and a dash of fresh lime juice can transform plain white rice into an elegant side dish. This is an easy herb to grow, even for apartment-dwellers; it thrives in small containers on a sunny windowsill.