Dena, my colleague and friend, is officially the household manager of Dr. Weil’s ranch, but in reality, she does too much around here to document. One of her many responsibilities is to act as the curator of the refrigerator. To do this properly, she sometimes has to read Dr. Weil’s mind. Over the years she’s gotten quite good at this. But she occasionally forgets that, to the doctor, the ‘fridge is not properly stocked if it is missing a fresh bunch of cilantro in a cup of fresh water.

There should always be fresh cilantro in the refrigerator.

Cilantro, Coriandrum sativum, is the green plant. Coriander is the seed of the cilantro plant and is a useful spice. Hence, cilantro and coriander are the same…but different. If you grow cilantro and let it go to seed not only will you have far too much coriander, you will also have plenty of seed to grow next spring’s cilantro crop. In our case, we grow cilantro in the cool season at the end of summer and throughout the winter. It will bolt – that is, go to seed – in the hotter months.

Cilantro poses no great difficulty to grow in the garden. Like most seeds, all it needs to germinate is some moisture and warmth. Be careful not to get it too wet or the soft seeds will waterlog and rot. I germinate seeds in seed cups and transplant them into the garden. We plant a large patch for use by the dozen or so people who eat regularly out of the garden. In the spring, its long, leggy stems bear delicate white umbel-shaped flowers. The mature plants look more attractive when planted as a back drop for more compact plants.

You can easily start cilantro seeds in potting soil in a small pot as well. It will grow on a bright windowsill or on the back porch. The tall, slender plants will eventually outgrow a small container. If you don’t intend to save seeds, a little pot will provide enough of the large, lower leaves to add as a fresh herb or to garnish several meals.

As for soil conditions, cilantro doesn’t seem to be too picky. I grow it in a rich garden soil. However, stray seeds germinate throughout our garden. Cilantro has grown in the heavily compacted clay soils between our beds and in the nearly inert alkaline soils by our tool shed. It would make sense that it would grow in these poor soils, as many Mediterranean plants thrive in the Tucson Basin. While the ancient people of the desert southwest were planting maize and squash, ancient Roman, Greek and Egyptian cultures were growing cilantro, one of the world’s oldest spices.

Cilantro is rich in thiamin, zinc, dietary fiber and vitamins A, C, E and K. It has trace amounts of riboflavin, niacin, vitamin B6, folate, pantothenic acid, calcium, iron, magnesium, phosphorous, potassium, copper and manganese. Coriander seed is well established as a medicinal herb commonly believed to aid in digestion and for its anti-inflammatory properties. It plays an important role in Ayurvedic diets as well.

A little known fact: ketchup, once America’s number one condiment, has fallen from grace, and salsa now reigns supreme. Many high quality salsas include cilantro in their ingredients. My favorite is Garlic & Cilantro Salsa made by Seeds of Change. You can also order Slow Bolt Cilantro seeds from Seeds of Change.

Barring a catastrophe, Dr. Weil always has cilantro on hand. Every so often I’ll pass through the kitchen on my way between houseplants and find him and Dena plucking the leaves from the stems. De-stemming can be rather labor intensive but well worth the effort.

A final note: Not everyone shares the good doctor’s love of cilantro. At IHateCintro.com, a typical sufferer’s account begins with, “I’ll never forget my first encounter with this vile weed…” It’s been speculated that a genetic variation makes some people despise cilantro – rather than sharp and tangy, cilantro tastes like soap or aluminum foil to them. If you are such a person, I suggest steering clear of Cilantro Walnut Pesto, a recipe in Dr. Weil’s book, The Healthy Kitchen: Recipes for a Better Body, Life and Spirit. It calls for no less than two cups of chopped cilantro leaves. 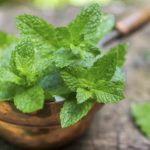