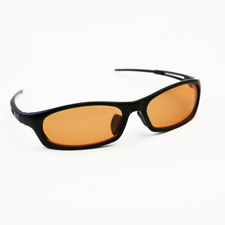 Smart phones, tablets and laptops emit wavelengths of blue light that can suppress production of the sleep-regulating hormone melatonin, causing insomnia. This effect is more pronounced than exposure to the blue light from a television screen because we hold smartphones and other electronic devices close to our faces, intensifying exposure. Leaving these devices on at night while you’re asleep can add to the problem.  Some research has shown that our eyes can detect blue light even through closed eyelids, resulting in suppression of melatonin production.

There isn’t a lot of research on the effect of wearing orange-tinted glasses to block blue light. I’ve seen only two small studies that demonstrated a benefit. One, from Switzerland, looked at the effects of wearing orange-tinted glasses called "blue blockers" on 13 teenage boys. The kids were monitored in the lab for a few hours before sleep and were significantly sleepier when they wore the glasses. Throughout the weeklong study, the boys looked at their device screens, as they would have when at home. Results from a 2009 study with 20 adults ages 18 to 68 found that those who wore amber blue-blocking glasses for three hours before bedtime had improved sleep quality compared to the participants who were randomized to wear yellow-tinted glasses capable of blocking ultra-violet, but not blue light.

This isn’t a lot of evidence to go on, but the blue light issue has attracted a lot of attention. I’ve read that General Electric is marketing a bulb intended for evening use with reduced blue light emission. (Blue light isn’t harmful during daylight hours – in fact, it enhances attention, reaction times, and mood).

Philips also has a bulb that can alter the intensity of its light through an app. A number of other products are available to help mask blue light, including a filter for smart phones and tablets. And there are apps that can change the intensity of the blue light from computers and cell phones.

If you want to try the orange glasses, make sure that you get some that have been tested for their blue-light blocking capability. Ordinary orange-tinted lenses may block blue light, but they may also block other colors and aren’t considered suitable for nighttime use.

The surest way to escape the sleep-disturbing effects of blue light is to cut back on the use of your phones, laptops and tablets in the evening and keep them out of the bedroom. 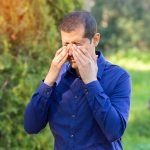