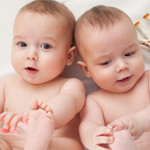 It is indeed true:  more twins are being born in the United States than ever before. As a matter of fact, according to a report from National Center for Health Statistics (NCHS), the overall rate of twin births increased by 76 percent from 1980 to 2009. Today, one in every 30 babies born in the U.S. is a twin, compared with one in every 53 babies in 1980. Beyond that, there’s also been an increase in triplet and other multiple births. Two factors seem responsible: the number of women who have taken fertility drugs or used in vitro fertilization in order to get pregnant, and an increase in the average age at which women give birth.

The age factor is important because, as women get older, their ovaries are more likely to produce more than one egg per menstrual cycle, resulting in fraternal multiple births. The biggest increases in twin births have been in women age 30 and older. In 1980, women in this age range accounted for about 20 percent of all births (singletons as well as twins and other multiples); between the years 2000 and 2009, these "older" mothers accounted for 35 percent of births.

As noted above, a mother’s age is a factor only in pregnancies with fraternal twins, which occur when two eggs are fertilized at the same time. During pregnancy, each fraternal twin has a separate placenta and amniotic sac. These twins can both be boys, both girls, or one of each gender. Genetically, they’re no more closely related than any other brothers and sisters. The mother’s age doesn’t affect the rate of identical twin births.

The increased rate of twinning extends fairly evenly across the population with the largest increases taking place among non-Hispanic white women and women age 30 and older. The NCHS also reports that similar trends took place in Western Europe and elsewhere during the 1980s and 1990s.

Twin births can present problems: the NCHS reported that more than half of the twins born during the study period were low birth weight (under five pounds, eight ounces) and one in 10 were very low. Low birth weight can put babies at risk for serious health problems and lasting disabilities. For this reason, it is very important for women pregnant with twins to have more frequent checkups and take more precautions than women carrying only one child.