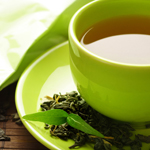 As you know, green tea (Camellia sinensis) affords many health benefits. The polyphenols it contains can protect your heart by lowering cholesterol and improving lipid metabolism and can lower your risk of cancer by scavenging for free radicals. I know of no studies suggesting that you shouldn’t continue to drink green tea while you’re trying to conceive or during pregnancy.

My only reservation has to do with the amount of caffeine you’re consuming in 32 ounces of green tea daily. No studies have linked caffeine consumption with delayed conception except among smokers who drank 8 or more cups of coffee per day. However, researchers have found that consuming the amount of caffeine found in five or more cups of coffee per day doubles the risk of miscarriage. Roughly 200 mg of caffeine are found in one and a half to two cups of brewed coffee and half that amount in two cups of brewed tea.

There’s no evidence that moderate caffeine consumption of 200 mg daily from green tea or other beverages increases the risk of miscarriage. Although the caffeine contained in a cup of green tea typically is about half the amount found in coffee, brewed imported green tea can contain as much as 110 mg of caffeine, almost as much as you would get in some brewed coffee. When estimating your caffeine intake, remember to add in other sources of caffeine in your diet, particularly soft drinks.

Fortunately, no studies have found a connection between caffeine and birth defects, low birth weight, a baby’s motor development or intelligence. But because caffeine can enter breast milk, you’ll need to watch your green tea consumption if you plan to breast feed your baby and limit your caffeine intake to no more than 300 mg daily.